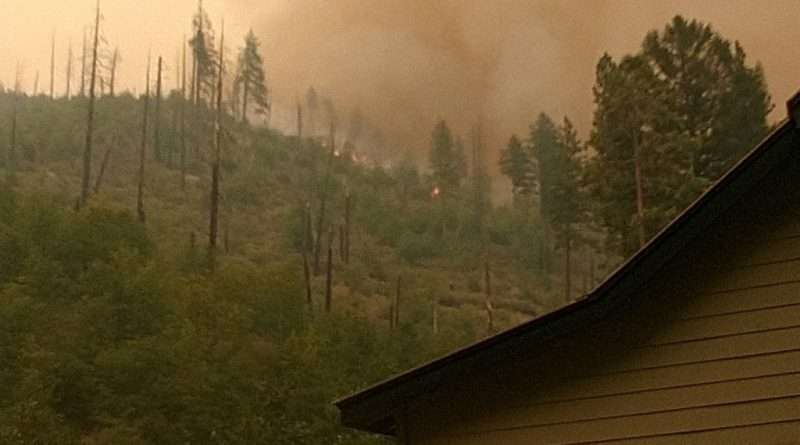 A Rush Creek Road resident saw the fire creeping too close for comfort. "This is just above our home on Rush Creek Road ( the top left corner of the garage is what is showing, along with the burnt remnants from the Rich Fire which was ignited on today’s date in 2008)," she said. "I guess this is what is meant by tonight’s briefing that, 'Just west of Twain in the Rush Creek area, crews encountered some holding issues.'” Photo by Sharon Taschenberg
News
July 30, 2021August 1, 2021 Editor

The fire is now 240,795 acres; and 24 percent contained, though Operations Section Chief for the West Zone Mike Wink said that tomorrow’s maps should show increased containment.

There have been 43 structures and 22 outbuildings destroyed. On the West zone, 85 percent of the assessments have been completed. There is more work to be done in the East Zone.

Tonight was the last daily community briefing for the Incident Command Team. From now on it will be broadcast every other night, so the next community meeting is scheduled for Sunday, Aug. 1, at 7 p.m.

Operations Section Chief Mike Wink reported that the Highway 70 corridor work continues and it’s down to one lane in a lot of areas. No change for the lower portion of the fire, where mop up continues.

Crews are on day five of building containment lines for the area near Butte Meadows. He reiterated that they put local knowledge in leadership roles and as a result really good progress has been made. No structures have burned in the area, including those that are in the footprint of the fire.

Back up to Humboldt Summit and over to Almanor, no change is reported, just continued work to build depth in fire lines. Also, in the area that runs parallel to Highway 89, there is no change, and crews are mopping up. With really smoky conditions, there wasn’t a lot of fire intensity. However Wink had a warning: Don’t be surprised in the days to come that you see smoke, it will be coming from inside the fire.

Operations Section Chief John Goss said that 24 hours ago there were thunder cells and adverse winds, but not today. “What a difference a day makes,” he said. “Those conditions that were predicted this morning did not materialize.”

Goss addressed the fire that flared up yesterday in the Rush Creek Road area. “It woke up and got into the old Chips Fire,” he said. Today it laid down and didn’t spread like last night, however about 19 structures are on the edge of the fire’s line. A fire protection group is in place.

Despite the weather conditions, Goss reported progress on putting in line. He said that last night there were two hot shot crews doing some planned firing on Mount Hough.  They were paying attention to the weather updates. They completed it; and half hour later the winds came. “Due to the good timing, they were able to finish all of the firing operations and secured Emigrant Road,” Goss said. As a result, firefighters don’t expect any more spread toward Taylorsville. Tonight crews will be securing it, as well as the area of Mount Hough on the south side.

There is one more firing operation planned for the next couple of nights above Meadow Valley, and there are still hotshot crews in the Bucks Lake Wilderness. Over to Bucks Lake, fire has been in containment for two days and it’s on patrol status there.

Meteorologist Lamont Bain addressed the showers and isolated storms that materialized yesterday and produced winds of 30 to 40 mph. He said that today the activity was a lot more subdued with smoke and cloud cover. He is still tracking some activity moving up through Carson City and Reno, but thinks it unlikely the fire area will see rain or thunderstorms from it.

Over the next couple days, winds will be relatively light with some brief gusts in the afternoon. Overnight humidity recovery improves and the afternoon humidity is high enough that it won’t put the area in critical fire behavior. There is a low lightning threat over the weekend. But heading into next week there is more chance for extreme fire behavior as the weather turns drier and warmer. Increased winds with gusts in excess of 20 mph, and afternoon relative humidity falling back into the teens. He said that forecast is still several days out and it could be refined.

PNF Supervisor Chris Carlton shared some interesting data — the combined area of the Plumas and Lassen national forests is roughly 2 million acres. With the Dixie Fire at 241,000 acres — it represents about 10 percent of the two forests.

“I want to talk about the cost of fighting this fire – it takes a lot of resources and there are a lot of impacts and a lot of costs,” he said. While some are quantitative – hours worked, supplies, etc., there also are the costs of the impacts around natural resources. He addressed the decision to allow bulldozers in the Bucks Lake Wilderness, and the need to prioritize people and communities.  “Absolutely committed to talking about what repairs and will be made,” he said.

LNF Supervisor Deb Bumpus  said that good progress is being made on the fire, even after last night’s lightning. While work must continue on putting out the fire, she said that “folks on both the Lassen and the Plumas have a draft plan” to begin restoration and that plan will be made public.

Incident Commander Mike Minton discussed the good progress that has been made on the Dixie Fire  “in the time that Team 2 has been here on the east side.” He said there is one more day of July left, and then it will be August. “August is affectionately known as dirty August,” Minton said, because it represents the peak of the fire year in California, as well as throughout the West.

He urged everyone to do whatever they could to prevent human-caused fires. “Unwanted human fires in dry, windy conditions … they can give us the most problems, particularly in August,” he said.