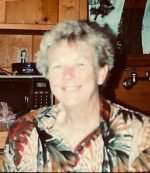 June Norine Ruttschow (Mickey Gannon), passed away on June 1, 2021 in Portola Ca.  She was born on January 23, 1929, in San Francisco, Ca.  At three months old she was adopted by Kent and Inez Gannon and raised in Marina Ca.  They were one of the founding families in Marina and she attended a one room schoolhouse. June graduated from Monterey High School in 1946.

She then worked as a telephone operator on Ft. Ord then in Monterey for “Ma Bell”.  She accepted a temporary transfer to San Rafael where she met her “sailor” Jack Ruttschow.  They were married in Monterey on January 5th, 1950 and were together until his death on Veteran’s Day in 1998. As Jack was moved around in the Navy she followed. They lived in Santa Clara, Corpus Christie Texas, Tennessee, Kansas, Honolulu Hawaii, Midway Island, and Escondido Ca.

When Jack left the Navy in 1961, they purchased a Mom & Pop, two pump Shell station/store in Marina.  They ran the business together until Shell Oil built them a new station a few years later. They resided in Marina until 1969 when they moved to Prunedale, Ca. where they resided until 1985 when Jack retired.

They moved to their cabin on Buck’s Lake and then in a few years to Meadow Valley.  She worked for many years at Buck’s Lake including Lakeshore Lodge, Buck’s Lodge and Haskin’s Valley Resort, usually working in the store. She was preceded in death by her loving husband Jack and is survived by her three children, Stephen Ruttschow (Julie), Sharon Spinetta (Charles) and Sandra Yalung (Michael).  Ten grandchildren and 13 great-grandchildren. There will be a graveside service in the Meadow Valley Cemetery on June 10th at 1:00 p.m.

Jamie M. Flanagan passed at Renown in Reno on May 24, 2021, surrounded by her loved ones. She was born…

Elizabeth Anne Vinish and Andrew Robert Sparano, both of Quincy

Sherry (Krueger) Kumler passed away quietly on June 2, 2021, in Bradenton, Florida. She was born in Minneapolis, Minnesota on…

Daniel Bauer and Erica Haedrick, both of Fall River Mills