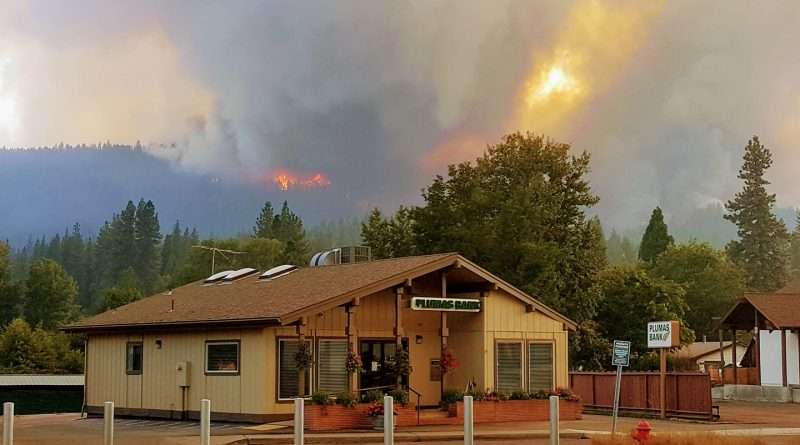 Fire is visible behind Plumas Bank in Greenville Aug. 2. When fire destroyed the town two days later, it was one of the few buildings to remain standing. Photo courtesy of Jeff Titcomb
News
August 3, 2021 Editor

That’s the message from Plumas County District 2 Supervisor Kevin Goss this afternoon at 3 p.m. The power had just gone off in Indian Valley and he was about to start his generator. Goss said he had just received word from a sheriff’s deputy that fire was bearing down on Highway 89 and Main Street in Greenville — the location of the Goss longtime family business — Village Drug.

“We’re going to lose a lot of stuff,” Goss said of the area. “A lot of buildings, a lot of history.”

Throughout the Dixie Fire, which ignited July 13, and then merged with the Fly Fire, Indian Valley has been in the crosshairs as southwest winds pushed it toward the picturesque area. Late yesterday afternoon, a little more than 24 hours after mandatory evacuation orders had lifted, and Greenville residents were feeling more secure, the winds pushed the fire across containment lines and threw several spot fires. More of those winds are predicted today and worse winds are forecast for the next couple of days.

Just before Goss called, Plumas News received a text from Ken Donnell who has been keeping the outside world apprised of what was happening in Greenville. This message was simple: We lost power in downtown Greenville.