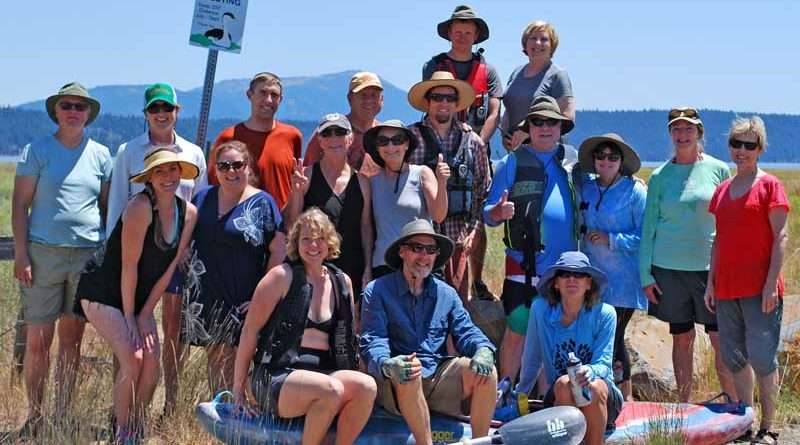 As part of the Feather River Land Trust’s newest fundraiser, 19 intrepid kayakers, including event organizer and the Land Trust’s Stewardship Manager Nils Lunder, braved the rapids of the North Fork of the Feather River on July 22. Navigating the waterway to their final destination at Lake Almanor, they disembarked at the final take-out spot, near Highway 36 at the causeway just outside Chester.

Kayakers initially met at the Chester Museum and entered the North Fork at that location. A handful of kayaks were provided for a small fee to those who didn’t have one of their own.

Before heading out, Lunder shared some brief remarks with the participants, reminding them that the kayak trip had its share of river obstacles and a swift current.

“There are some areas where you may have to duck a bit to avoid overhanging branches in the cottonwood forest along the river bank,” said Lunder, adding that the river is powerful, “so stay calm” while kayakers negotiate their way downstream.

“We have a couple of stops along the way,” he added. “And once we hit flat water in Lake Almanor, we’re going to paddle out into a weedy patch, where a few carp might splash around a bit” in protest as kayakers row through their habitat. “But don’t get too scared, they don’t eat humans!” he quipped.

Lunder said that the group could expect to see osprey, belted kingfisher, yellow warblers, and American white pelicans, among other species typical to the area, including bald eagles and peregrine falcons, some soaring mere feet away from the kayakers as they paddled along.

Despite the expected obstacles, the trip downstream was an excellent opportunity to showcase the beauty of the river corridor, with magnificent views of Lassen Peak and the Caribou Wilderness, he said, as well as the beauty of the Chester Meadow and Olsen Barn.

After the float, the participants shuttled back in their cars and then walked to rendezvous at the Olsen Barn to relish a delicious barbecue featuring locally made bratwurst sausages and side dishes.

Rounding out the summer-time celebration was music by local favorites Rickety Bridge, featuring multi-instrumentalists Cory Rickert and David Bainbridge, who entertained the crowd with a variety of contemporary music.

Later at the barn site, Lunder shared that he chose to do this event because he loves to be floating on the river sharing the experience with like-minded people and having fun.

The event was designed as a way to “celebrate the preservation of the meadow and restoration of the Olsen Barn,” Lunder said. “We actually just got started on the reconstruction of the barn’s foundation,” thanks to the many donors who have supported each stage of the project.

Chico resident David Dalton, with a home in Warner Valley, said he and his wife were excited to participate in the float, glad, he said, that an organization like the Feather River Land Trust exists to help preserve open spaces in order to retain the natural beauty of the region, while reducing the possibility of overdevelopment.

“We donate to the Feather River Land Trust because we support their goals,” Dalton said.

Both are new to kayaking, he continued. “The first time was recently in Indian Valley as part of a Feather River Land Trust-sponsored event at the Heart K Ranch, which included a barbecue as well. … Kayaking is really an enjoyable activity.”

Ellie Hinrichs, membership coordinator for FRLT and one of the kayakers, said that everyone participating in the float had “a great positive attitude,” despite a few people getting wet falling in as they made their way downstream, which was not altogether unexpected for such an aquatic voyage, she said. No one was in any danger, however, as the kayakers were all required to wear flotation devices and the stream wasn’t too deep.

Hinrichs mentioned that the FRLT wanted to thank all the participants for their support during the fundraiser.

Karen Kleven, development director of the Land Trust, described the trust’s mission as primarily to protect the special places of the Feather River region, which includes its cultural heritage, such as preserving and stabilizing the Olsen Barn.

All proceeds from the float benefit FRLT in covering costs associated with these types of events.

For more information on the land trust, contact Karen Kleven at [email protected] or call 283-5758. The trust’s website is frlt.org.