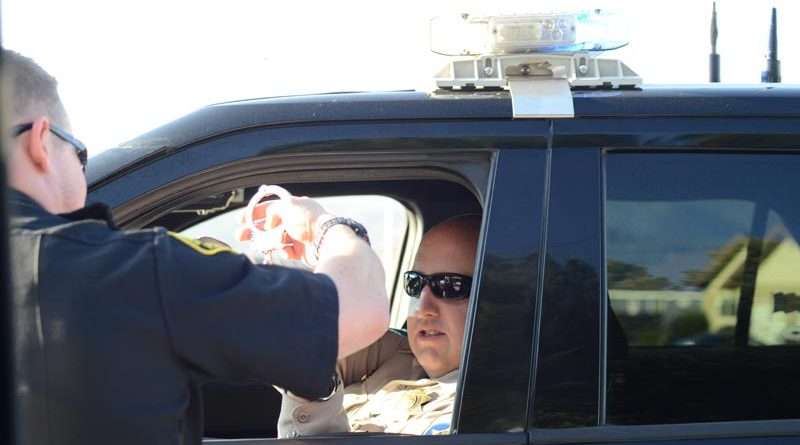 It’s the evening before the big Fourth of July weekend. Roads and highways throughout Plumas County are seeing more traffic than probably anytime during the summer months.

Doing what he called “hot laps” around the Quincy area, Plumas County Sheriff’s Deputy Justin Stanley was becoming familiar with an area he normally doesn’t cover and the increase in population.

Cruising Main Street in Quincy, people are seen overfilling Pangaea’s onto the sidewalk as they enjoy a beverage and catch up with old friends or meet new ones.

Music is playing and people are stopping to play a game in front of High Elevation just a block away. For once, the generally low-key establishment is wide open and ready for business.

Making another tour of the same street the scene suddenly changes as a thin man wearing bibbed overall rides down the middle of Main Street on a onewheel skateboard. Swinging wide he makes a right onto Harbison, right again onto Jackson and then Stanley lets him know it’s time to pull over.

As Stanley gets out of his new 2019 F150 departmental rig, the bearded man watches him intently. Stanley’s in a good mood. His job is to make sure the man stays safe and he keeps others free to enjoy their weekend of adventures.

The bearded man, whose driver license reveals he’s from Hawaii, greets Stanley with a namaskar greeting — his hands shaped in prayer and his head bowed.

Hoping the visitor to the area will continue to obey the laws, Stanley climbs back into his pickup and he’s off again.

Stanley’s the second to the newest deputy on the local force, he said. That means he doesn’t have a choice of which area he normally covers. In the year he’s worked for the sheriff’s office he has covered the Greenville to Chester area. While he’s become very familiar with the roads, streets and alleyways of those communities, he’s not so familiar with Quincy. Part of the three-hour ride along was spent familiarizing himself with place names and streets.

Although Stanley has about 13 years experience in various law enforcement units, according to special programs Sgt. Carson Wingfield, he decided to return to Plumas County. “We’re lucky to have him,” Wingfield added, more accustomed to officers leaving the area and heading for departments where there was more money and possibly more action.

Stanley said his parents were living in Keddie when he was just a baby, before they decided to move on. Stanley spent his adult training years in the Sacramento area.

When asked why he went into law enforcement, Stanley quite candidly said he didn’t have the best experiences while he was growing up. He wants to help others make “a change that needs to happen for people to better their lives.”

At some point in his early years Stanley decided, “I’m not going to be my parents.”

His goal is to “help any of those kids in bad situations.”

And what really cemented the idea that law enforcement was the right path? Stanley said that through the loss of a family member he wanted to help keep drunk drivers off the roads.

An assortment of vehicles were beginning to appear along the shoulders of Highway 70 through East Quincy, as Stanley’s shift began Wednesday, July 3.

Although there was still plenty of room for others arriving later that same night or within the next day or two, the whole area had taken on a festival feel.

At one point, Stanley decided to cruise along Lee Road, the backside of the festival, to see what was going on. During one trip he stopped a young woman who was attempting to ride a skateboard near the edge of the roadway. “Just want to keep you safe,” was his continued, pleasant message.

On another loop he noted two young women walking down the left side of the roadway toward the fairgrounds. Talking mostly to himself, he said the one didn’t look old enough to be seen carrying beer. Waiting for them to approach, he greeted them and asked the one with long dark hair if she was old enough.

She seemed half-delighted; slightly annoyed that he would ask to see her identification. Handing it to him, Stanley read out loud, “You’re from New York.”

She was asked if rural Plumas County was something of a culture shock for her. But the 25-year-old said she was spending time in Colorado with her friend, the woman with grayish blue hair and enormous glasses standing next to her. She said she was catching a few festivals and was actually working at some camp in Maine.

Stanley made other stops during the early hours of his 10-hour shift that would end at 3 a.m. No tickets or citations were written during that time. The message to officers was to keep it mellow and keep people safe.

At one point, Stanley noted a pickup parked in a corner next to Dollar General. Swinging back around he stopped his pickup and went to see if there was a problem.

When he returned he said the young woman inside was crying her eyes out. She told him she was getting a divorce and was trying to drive somewhere when she realized she was too emotional.

According to Stanley, heavy grief like what he experienced with the young woman, produces the same effects in the body as alcohol. Although the person isn’t intoxicated, he or she isn’t able to respond as coherently as at other times.

He said it was good that she was cognizant enough to know she couldn’t drive safely and pulled over to an out of the way location.

As the time passed and Stanley continued his rounds up one street and down the next, he seemed to sense that people were behaving themselves.

Numbers continued to arrive adding to the cars along Highway 70, filling the spots along Lee Road, and joining other campers at various locations set up by festival organizers. The normal greens of Leonhardts’ pasture off Quincy Junction Road was taking on all the colors of vehicles and people as they moved in and waited for the High Sierra Music Festival gates to open.