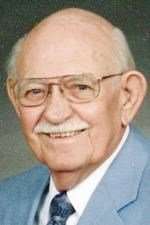 Kenny passed away peacefully at his home with his wife and children by his side. He was born on December 2, 1932, in Wasco, CA to Neva and L.T. Hancock. He married his high school sweetheart Marie Mouser just after they both graduated in the same class at Wasco High in 1951. He had the deepest love for for Marie and his children Dean, Steve and Diana. He had a strong faith in the Lord and was a member of Valley Baptist Church.

He was employed with PG&E for 35 years, starting in Wasco, and moving to several California cities before returning to Bakersfield when he retired. He was a lifelong athlete. He enjoyed having Thursday morning breakfast with retired PG&E buddies at Pappy’s. His friend Bill Harvey taught him to golf.

He often played golf with his sons, grandsons, brother Ronnie Hancock, Bill Satterfield, Earl Brown and Kiki. We know he is now in heaven playing on beautifully manicured courses with his best friend Gordon Skeels. He was an excellent bowler. His bowling accomplishments include having four perfect 300 games, one 299 game, and an 800 series. On May 14, 2011, he was inducted into the Golden Empire United States Bowling Congress Hall of Fame for Superior Performance. His athletic abilities also included fast pitch softball for 40 years, and hunting and fishing with his sons. Kenny never met a stranger.

Predeceased by his bother Jim, sister Carole and Aunt Mable.

Special thank to our neighbors who are always there for us.

In lieu of flowers, you may donate to the American Cancer Society.

A Celebration of the Life of Lawrence (Larry) W. Kirby will be held at the Roundup Saloon in Bieber, CA…

Stephanie Lynne Blanton and Jacob Valentino Angelis, both of Chester