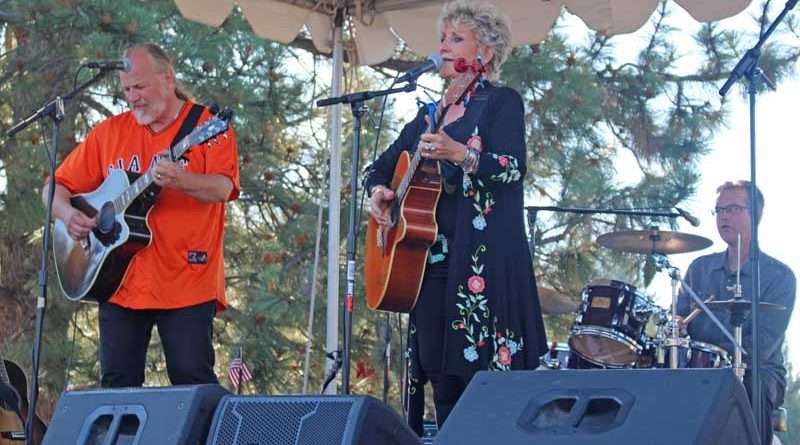 From left, Dale Poune, Lacy J. Dalton, Michael Kalmar and, just out of the shot, Billy Laymon rock and roll to the delight of the crowd.
News
July 16, 2017July 13, 2017 Lauren Westmoreland, Staff Writer

Lacy J. Dalton and the Dalton Gang took the stage at the Graeagle Mill Pond on the evening of July 2, with headliners Robbie James and the Streets of Bakersfield kicking off the show.

Many attended the musical event, a special to the 45th annual Mohawk Independence Day celebrations in Graeagle, and according to some, the setting and the music were a perfect way to end the weekend of fun.

A specially made stage backed up to the Mill Pond, with the soulful sounds of Lacy J. Dalton echoing across the water, and the music got quite a few concert-goers out of their seats and onto their feet for some dancing.

Dalton played and sang from a wide repertoire, starting with the national anthem to recognize veterans and first responders. “I’m honored to do this for our first responders and veterans,” Dalton said. The gang then played songs ranging from country-themed originals to Grateful Dead covers.

Dalton worked the crowd, joking about the penetrating heat at the end of the day, as afternoon stretched into evening and many hid under wide brimmed cowboy hats and umbrellas until the sun dipped below the horizon.

Dalton also announced with pride that she had been honored with her induction into the North American Country Music Association, International Hall of Fame on March 18 of this year.

This is the first time that Dalton has performed at MVID, and from the response of attendees, the concert proved a hit.