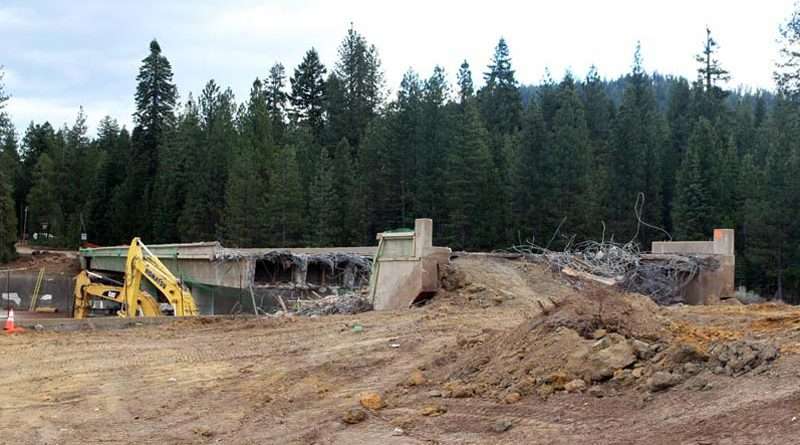 Demolition work is underway to replace the severely deteriorated Lake Almanor Spillway Bridge, approximately 15 miles from the town of Chester on Highway 89. Photo by Stacy Fisher
News
May 25, 2018May 23, 2018 Stacy Fisher, Staff Writer

Demolition work is underway to replace the severely deteriorated Lake Almanor Spillway Bridge on Highway 89, approximately 15 miles from the town of Chester.

The new 467-foot long bridge, slated for completion by mid-November 2018, will be the same length as the older structure, built in 1963, but widened from 28 feet to 40 feet to accommodate two 8-foot shoulders and two 12-foot lanes, and will include seismic improvements and metal barrier railings.

Featuring current standards for a pre-cast concrete girder design, the new bridge will be wide enough for pedestrians and bicyclists to safely cross.

Funds for the new bridge were available from the Caltrans’ 2016 State Highway Operation Protection Program.

Traffic had been diverted to Highway 36 and Route 147, but a temporary one-lane bypass now under construction on the lakeside of the old bridge will include a bank of automated signal lights at both ends of the roadway to provide traffic control during the bridge’s construction, noted Q&D employee and grade setter Juan Martinez, who was working at the site Saturday, May 12, taking measurements that are used to establish the right elevation for the temporary single-lane detour.

Once the paved bypass road is completed, traffic on Highway 89 is expected to re-open no later than Thursday, May 31, to provide unimpeded access to areas further east of the construction zone and Route 147 during the project’s projected timeline, according to Ryan Johnson, resident project engineer.

A letter from Caltrans sent to area residents before construction commenced stated, “We understand that construction may cause a series of inconveniences for locals and visitors. We apologize for unavoidable disruptions and commit to keeping you informed. … We are also excited for the improvements this project will bring to frequent users of SR 89 in the Lake Almanor Area and surrounding communities, and for California taxpayers overall.”

Caltrans District 2 is responsible for more than 1,700 bridges over 27,307 square miles, encompassing Plumas, Lassen, Modoc, Shasta, Siskiyou, Tehama and parts of Trinity and Butte counties, and currently has nearly 120 projects in various stages of development.