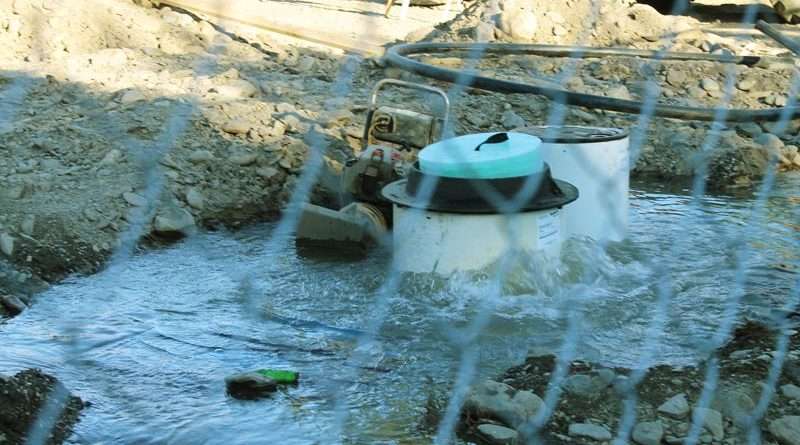 While many first responders were anticipating water erupting into the air, what they found was a steady bubble of water coming up from a smaller line. Photo by Victoria Metcalf
News
July 17, 2019July 24, 2019 Victoria Metcalf, Assistant Editor

When someone in the Redberg Avenue area reported a broken waterline the evening of Wednesday, July 10, it caused quite a bubble of excitement.

Not much was going on. High Sierra Music Festival and the crowds drawn to it or Plumas County’s other vast recreational opportunities for the four-day July 4 weekend left some at loose ends.

While those arriving to the scene anticipated a geyser of water shooting into the air, what they really found was bubbling water that was spreading.

According to Jim Doohan, general manager of the American Valley Community Services District, the problem was a loose coupling.

Apparently a new employee with the construction company in charge of building the Grocery Outlet at the corner of Redberg and Main, didn’t tighten it down enough, Doohan said.

Crews were working on the connections to the AVCSD waterlines that day, Doohan explained.

They went ahead and charged the system, which is the standard practice of adding HTH tablets or calcium hypochlorite, a form of bleach, to clean the system. The practice is then to let the tablets do their job on disinfecting the system for a few days.

It’s “not a total blowout,” Doohan said. It was a 2-inch line that started leaking and set the rest in motion.

Members of the Quincy Fire Department arrived immediately and the California Highway Patrol was on scene in case traffic control was needed.

“The guys got out there pretty promptly,” Doohan said about AVCSD employees. They were able to fix the situation with no other incidents.