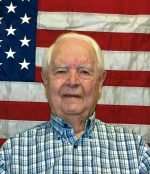 Leonard Earl Maurer passed away quietly on March 11, 2021 in Carmichael, CA. Born on March 5, 1924 in Wendell, ID, he was the youngest of the seven children of Rose Emily and Earl Foster Maurer.

Leonard graduated from Wendell High School in May 1942 and subsequently enrolled in the Twin Falls Business School.  Shortly thereafter, he was drafted and entered the armed forces in February 1943 at Fort Douglas, UT and completed basic training for the newly established US Air Force in Atlantic City, NJ.  Upon completion of basic training, Leonard was sent to the Army Administration School at Arkansas A&M in Jonesboro, AK.  Upon graduation, he was assigned to the 104thBomb Group under the 8thAir Force in Great Falls, MO.

Aboard the ocean liner Queen Elizabeth, Leonard arrived in England in November 1943 in preparation for the June 1944 Normandy D-Day landings. While serving in England, he had the opportunity to visit many of historical sites including London, Oxford, Cambridge, Bath, Edinburgh and Wales. While in Bath, he had the opportunity to meet his uncle, Leonard Hawkins, for whom he was named. Leonard returned to the US in August 1945 and was discharged from the service in October 1945.

After a brief sojourn back to Idaho, Leonard enrolled at Willamette University in Salem, OR in the spring of 1946. While at Willamette, Leonard became a member of the Beta Theta Pi fraternity serving as its president in his senior year. Leonard graduated in June 1949 with a degree in Business Administration.  His first job out of college was with the New York Life Insurance Company in Boise, ID.  In September 1949, a former Willamette classmate offered Leonard a position with the Collins Pine Company in Chester, CA.

Moving to Chester, Leonard began his career at Collins Pine in October 1949.  In 1954, Leonard met Beverly Alexander and they were married on December 19, 1954.  They eventually had two sons: Mark Everett (1957) and Myron Dillard (1959). Unfortunately, Beverly passed away unexpectedly on November 12, 1978.

In the fall of 1979, Leonard renewed acquaintances with an old family friend Marilynn Foster who had lost her husband, Bob, in September 1978.  Leonard and Marilynn were married on February 16, 1980 in Sacramento, CA. They continued to live in the Chester area until Leonard’s retirement from Collins Pine in 1988 at which time they moved initially to Davis, CA and subsequently to Carmichael, CA.  They were married for over 33 years until Marilynn passed away on July 13, 2013.

Leonard is survived by his daughter Robyn (Jeff) Payne of Carmichael, CA, and sons Mark (Cathy) of Reno, NV, Doug Foster of Eureka, CA and Myron (Marilyn) of Winfield, IL.  He is also survived by 9 grandchildren and 2 great grandchildren.

Leonard will be greatly missed by all who knew him.  A family memorial will be held in Chester, CA at a later date.  In lieu of flowers, please consider a donation to your favorite charity.