Leslie Jean Hardy (nee Fenster) joined the planet on May 22, 1942, in San Mateo, California. She burned brightly throughout her life, achieving multiple “firsts” – first in her class in grammar school, high school, and college. One of the first female veterinarians in the country. 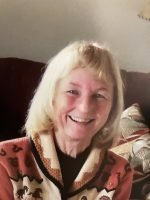 She was named after her father, Leslie Emile Fenster, who, with only an 8th grade education, became a manager for Levi Strauss. Her mother, Thelma Caroline (Petersen) Fenster, was a fashion designer and a homemaker. Leslie is survived by her spouse Michael Ganahl, her sister Diana (Boo) Fenster Freeland, Brother-in-Law Jim Freeland, her nephews Neal and Ryan Freeland, and her grand nephews and nieces Zack, Amelia, Cormac, Roxanne and Elliot.

After graduating as Valedictorian from UC Davis in 1964, Leslie was denied a spot in the Veterinary Program there because, as a woman, she “shouldn’t take the spot of a man” – typical in 1964. Instead, she accepted a fellowship offer from Dartmouth College where the faculty was shocked to discover upon her arrival that Leslie Fenster was, in fact, a woman. Another first. Upon completing her master’s degree, she earned a spot at Michigan State University Veterinary College, finally able to follow her lifelong dream.

Over the next several decades Leslie practiced veterinary medicine, first as an assistant, and then by purchasing and managing three hospitals: Park Center in Alameda, Thornhill Pet Hospital in Montclair, and Foothill Pet Hospital in Oakland. After she retired from practice, she maintained her qualifications and did relief work at various hospitals in Northern California.

But it was not all work for Leslie. She became involved with the Acorn As, a group of Model A afficionados who took trips to Alaska, to the Mississippi River Valley, and Boston. Together with her partner Michael she owned collectable vehicles, which they lovingly restored. She and Michael flew twin engine Cessnas all over the west coast and into Mexico and Sun Valley.  And Leslie and Michael ventured on the Pacific Ocean aboard their beautiful three masted schooner Millennium Falcon, sailing to Cabo San Lucas as part of the Bah Ha Ha cruiser’s rally and spending the winter investigating the Gulf of California. They also joined her sister and BIL on multiple Pacific crossings and visits to Alaska aboard the Santa Cruz 52 Prufrock.

In 2012 Leslie and Michael decamped from Alameda to Quincy, CA, to a beautiful 60+ acre property nestled between the Feather River Highway and Spanish Creek, Paddlepaw. She continued her love of Model As with the Feather River As.  Leslie, who famously refused to accept gender roles her whole life, took up quilting. With Michael at the embroidery machine adding the occasional paw print monogram she made many beautiful quilts and gifts and enjoyed the companionship of members of Quincy Quilters.

The Dixie Fire in September 2021 almost swallowed the whole property, but Leslie and Michael were restoring it when she received her diagnosis on June 25. Fast forward 6 weeks, and Leslie and Michael marry on September 1 (beating by one day Leslie’s superstition to never start a journey, or a project, on a Friday). She succumbed to her illness on September 7 in her own bed at Paddlepaw with Michael by her side. Her final admonition to those of us who love her: “I’m only going to say this once – get screened.”

Leslie’s ashes will be scattered on the Pacific Ocean.