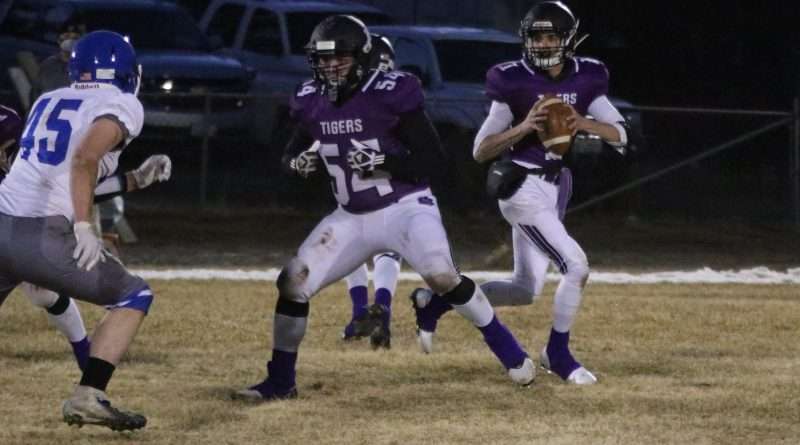 Portola High Offensive Tackle Xander Loomis, no. 54, protects Tiger quarterback Dylan Gonzalves during the 2021 spring season. Photo by Mari Erin Roth
Sports
July 16, 2021 Editor
Mari Erin Roth
[email protected]
Sports Editor
The big annual Lions All-Star football game will not be happening this year, but honored players for teams were named in rosters for the North & South teams. Each player was presented with a T-shirt and a Lions pin to commemorate their achievements.
“The 2021 Lions All Star game was, unfortunately, cancelled due to the Covid-19 pandemic,” said Launa Myers of the Lions organization. “Lions All Star Football would like to recognize the players originally chosen to play in the 2021 All Star game by releasing the names of the players on the North and South rosters.”
All Star team members are senior high school students.
For the North, Portola High is represented by OT/DT Xander Loomis. “Xander is an outstanding young man that truly deserves the award,” said PHS head football coach Steve Heskett. “He has played football for 10 years and lives and breathes football. He is just as good a kid on the field as off. He is heading on to Butte College for four more years of football.”
Quincy High is represented by WR/TE/CB Nick Caiazzo. QHS Athletic Director Jason Hawkins said of Caiazzo, “He is an outstanding young man that exhibits everything we look for in a student-athlete.”
On the South team, Chester High is represented by QB/S Kameron Stelzriede. “Kam developed himself into a great leader and player,” said CHS head football coach TJ Ragan. “ No one was more disappointed than me for him not to have his senior season. From what he did his junior season and how hard he worked going into his senior season I believe he would have been the best player on the field in all three phases of the game.”
Greenville High is represented by OG/NT Harvey Merino. “Coaching Harvey has been such a pleasure because he is a good person,” said GHS head football coach Dave Keller. “As a player, Harvey has grown the past four years. Playing on the offensive line is an essential, but thankless, responsibility. Yet he handled it and excelled at it his senior season. Replacing him as a player and, more importantly, as a teammate will be difficult.”