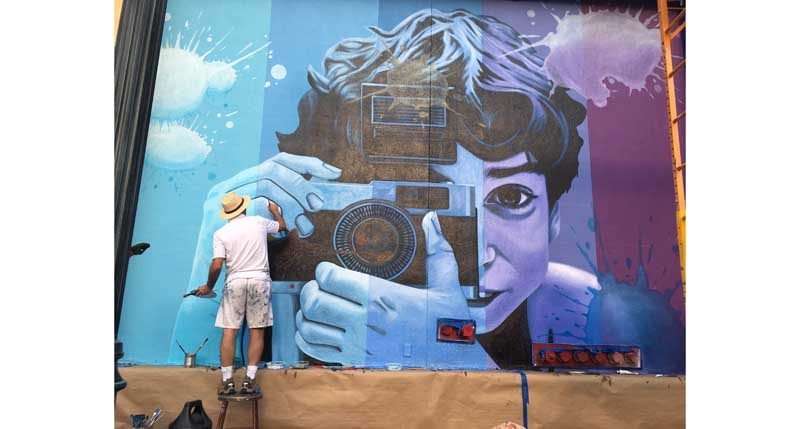 Just a few days after completing an outdoor mural in Yuba City, Rafael Blanco pulled an all-nighter to paint a scene in downtown Reno July 15 and 16 for the city’s fourth annual 24-hour mural marathon.

The event is a bit of an endurance test, not only because of the continuous 24-hour window for creation, but because the artwork is done on the outside of a downtown building in the Nevada heat.

Perhaps the 11 days spent in Yuba’s 108-degree oven and the three days it took to complete the mural helped to “condition” Blanco for the Reno marathon where seven selected artists were invited to decorate their outdoor “canvas.”

But Blanco, Feather River College’s art department director, had an informed idea of what was to come. The local artist had experience from the first year of the competition in 2014, and last year in 2016. Judges recognized his talents and awarded him second-place honors both years.

The annual art spectacle is part of a Reno movement called “Artown” that began in 1996 to bring art into the foreground. Art-inspired events occur throughout July.

For the public mural art competition, “canvases” are made using exterior walls of the Circus Circus Hotel and Casino facing Virginia Street.

Talent for the artistic endurance test under the July sun compete for prizes of $2,000 for first place, $1,000 for second place and $500 for third. In addition to prizes for the winners, each of the seven artists received $150 in food vouchers, accommodations and $750 for supplies prior to the start of the mural challenge.

During the event, the busy avenue is closed off and vendors set up all along the block. Shade and seating are provided so the public may watch as the art unfolds hour by hour from beginning to end.

Entertainment is peppered throughout the afternoon and evening such as DJ dancing in the street, stilt walkers, hoola hoops for all and a fire show.

“The first year, I painted 24 hours straight,” said Blanco, “and last year I painted for 23.” The marathon began at 10 a.m. Saturday morning and ended 24 hours later on Sunday. “If I tried to sleep I would just end up thinking about it,” said Blanco.

All of the 2017 artists stopped at some point during the night, except Blanco. Most knocked off work by about midnight or shortly thereafter and returned around 8 a.m. to finish up.

Even still, even painting more hours than anyone else, FRC’s Blanco acknowledged the challenge of the time constraint. “I can’t work miracles,” he said at hour 21 as his surrender began to creep in. The watching public seemed to disagree and could be heard making comments as they passed by such as, “Oh my gosh, that’s amazing” and “Are they going to vote? Because this guy is obviously killing it,” and even, “Wow, look at that. This guy’s a miracle worker.”

A banner hung on the scaffolding Blanco used to continuously climb up and down to reach all corners of the art piece. It gave artist credit to “Feather River Art Program.”

Although painting alone in the wee hours, Blanco had a whole crew of relatives on hand who supported his efforts in the heat of the day, late into the night and very early in the morning. They gathered directly in front of Blanco’s work-in-progress.

Perched under a shade canopy on stools and fold-up camping chairs, a nephew took time-lapse pictures while family members remained ready with food and beverages to keep the artist going. The youngest supporter was six-week old Teo Blanco cradled by Rafael’s dedicated and heat-enduring wife, Yascara.

Two hours after Sunday’s 10 a.m. announcement, “brushes down,” cash awards were handed out in front of a large crowd gathered to hear the judge’s choices. FRC’s Blanco was given a $1,000 prize and presented with second-place honors once again. Truly, number two tried harder.

The seven marathon murals will remain viewable from North Virginia Street, near Fifth Street, on the exterior walls of Circus Circus facing the art park filled with large outdoor sculptures from Burning Man.