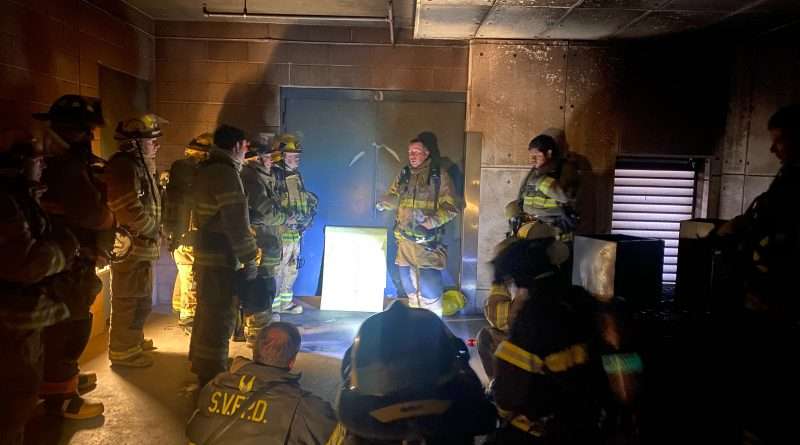 Firefighters from across Plumas County participated in live fire training exercises at the Washoe County Regional Training Center on Nov. 7-8 — the same tower where the Reno Fire Department holds its fire academies.

It was a special training that had never been done in conjunction with Plumas County firefighters. Firefighters from the Beckwourth, Sierra Valley, Eastern Plumas, Quincy, Long Valley, Loyalton and Peninsula departments all participated. Beckwourth Fire Chief Bret Russell organized the event with assistance from Assistant Fire Chief John Fatheree, of Eastern Plumas Rural Fire. “John was instrumental in this training; I couldn’t have don’t it without him,” Russell said.

Russell and Fatheree went to the training center in advance of the two-day event for Plumas firefighters and learned how everything operated, and then they conducted the event themselves. “The organization was more than helpful,” Russell said.

The training catered to the seasoned and well-rounded firefighter, as well as the fresh off-the-street rookie firefighter. “The cohesion among all of the participating fire departments was phenomenal,” Russell said. “This type of training is more than necessary due to the fact that we all work together on a regular basis and heavily rely on each other on every major fire scene.”  Each day’s training at the tower mirrored the other, offering the same training on both days for all participants.

The full-day training included fire behavior and interior and exterior responses. “We set up scenarios and then dispatched the firefighters to respond. We asked them to answer questions such as ‘What are you going to do?’ and ‘What resources do you need?’ Russell explained. Following the drills, there was an action review of the responses.

Beckwourth Fire fronted the cost of using the training facility, which was $520 per day.

“The fact that we about maxed out on the number of firefighters on both days speaks volumes about the dedication of Plumas County firefighters and their commitment to our communities,” Russell said.