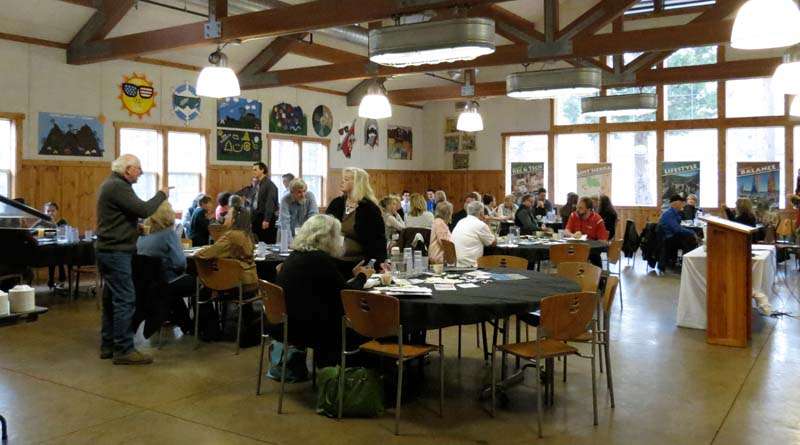 The annual Plumas Business Summit took place at Sierra Nevada Journeys on April 24, with many businesses around Plumas County in attendance.

The Summit was titled “Mapping Our Business, Where Local Meets Global,” with a full lineup of local speakers and business owners geared up, ready to present and network with attendees.

After a full breakfast provided by Sierra Nevada Journeys, Audrey Ellis of the Eastern Plumas Chamber of Commerce opened the day with a warm welcome and introduced Tiffany Lozano, founder of the Mama Said Project as well as being a branding specialist and creative entrepreneur.

“We are all very excited to have you here and we are looking to tapping into the wisdom of the room at this summit,” Lozano said. “We want to focus on bringing down the walls between the classroom and ‘real life.’”

Lozano went on to express her passion for entrepreneurship, and how vital the entrepreneurial spirit is in a rural community such as Plumas County, where many create the job or career that they have always dreamed of having.

Lozano was followed up by Angela Cordell, director of the Far North Center for International Trade Development, described as a “PR guru.” Cordell spoke of her passionate involvement in increasing student exposure to national trade, as well as her work managing a grant on behalf of the California Community College system to support jobs and the economy throughout the northern region of California.

“I feel that access to global curriculum is a major focus,” Cordell mentioned during her presentation. “There are many that love this area, but struggle to find their niche. The best thing that we as a community can do is focus on how to open up opportunities to grow our communities.”

Cordell then went on to speak about the educational tools available that foster economic sustainability and growth.

Lisa Grant, co-owner of Dickens Drilling and a longtime resident of Quincy, was next on the dynamic lineup of speakers, with a focus on “homegrown entrepreneurship” and the journey she took to become an entrepreneur.

Grant had a different story than some may have imagined, with a non-traditional road to her career, starting with a family and two kids by the age of 18. “I didn’t attend college,” Grant stated. “But after having my kids, and moving back to Plumas County at age 20, I took on a position at a gas station. You know, the thing is, some jobs that seem the least important impact us the most.”

Grant explained how that experience introduced her to not only the community, but also gave her baseline skills needed in any position in the workforce, such as communication and money handling skills.

“I really want to emphasize this to local young people,” Grant said. “I went on to take a position at Plumas Bank after my stint at the gas station, and so many skills that I would later need to co-own Dickens Drilling came to me through those jobs, which I am grateful for.”

Grant went on to explain that she had been laid off in 2010 during the recession, and despite the “breakup nature” of the event, as she called it, went on to utilize local resources and buy Dickens Drilling.

“I never saw myself as an entrepreneur,” she laughed. “After looking up the word in the dictionary, I came up with this: an entrepreneur is someone that is willing to organize and manage a business with initiative, despite risks.

“Then I came up with some personal adjectives that I felt described entrepreneurship; adrenaline, deadline junkies, bossy, control freaks, community minded, smart, ingenious, loves research, accountable, sleepless, confident, restless, visionary and single minded. These are all qualities that make up great entrepreneurs, and successful ones at that.”

After a bit of time spent explaining her role in her business and how it meshes with the roles of those around her, Grant noted, “Anything worth having takes dedication.” This led into the first break of the day, allowing attendees to move around and network with business owners and entrepreneurs.

Dr. Kevin Danaher, PhD, co-founder of Global Exchange, FairTrade USA, the Green Festivals Environmental Service Learning Initiative and the Green Guardians, as well as being an instructor in the Feather River College Incarcerated Students Program, took the stage to speak on a wide array of topics related to local economy, options for growth and ways to transition successfully into a new type of community.

Danaher opened with points touching on extractive economic models, and how our current economic model is a destructive process, giving space for free-thinkers to move into constructive economic modeling concepts. He also spoke about the current opioid crisis and how it is affecting rural areas such as Plumas County, leading many to look for alternatives such as Proposition 64, which Danaher noted, “Creates an opportunity and a challenge.”

Danaher spoke about the benefits of utilizing hemp and how the need to “demystify cannabis and the byproducts thereof” is great in the current social climate, with marijuana regulations a hot topic across the country and in Plumas County itself.

Danaher also spoke about the possibility of creating a 500-year plan for the county, saying, “We need a long-term consciousness. It would behoove us to look ahead at how we can plan to benefit the area, knowing that we may never see those plans come to fruition.” Danaher then went on to say, “We must become good ancestors.”

Amy Schulz, Economic and Talent Development and Co-Creator of the New World of Work, came up next, with thoughts on the current “Rec and Tech Movement” that seems to be growing organically in Plumas County, speaking to the need for residents to determine ecosystem development.

“I like to say that change starts on the edge and works its way to the center,” Schulz said. “When we talk about ecosystems, we must ask ourselves what an ecosystem is. Mainly, it consists of self organization and a shared sense of purpose.”

Schulz spoke about the fact that employers are hiring differently now, but Plumas County residents are uniquely fitted to the challenge, as many locals already have patched together a variety of part-time jobs to fill the plate. “There is a great spirit of resilience and resourcefulness in Plumas County,” she commented.

After commenting on the possibilities of an economic plan for the county, attendees splintered off into smaller groups to have round table discussions in three 20-minute increments about a variety of topics, from global opportunity to the challenges that Plumas County currently faces.

Quincy students Cameron Scully and Corbyn Koskinen gave a brief presentation demonstrating a startup program for the community, called lenztrip.com. The idea would be for local businesses to sign up with the site, providing local internship opportunities for young adults searching for a career.

“It would also help the businesses become involved with local students,” Scully said. The website launched early in April and is currently open to locals for information about how to participate and get the program off the ground.

This was followed by the announcement of the winners of the 2017 Plumas County Global Business Plan Competition: a group of students from the Indian Valley Academy who traveled to Uganda earlier this year to implement their development project, Sustaining Youth Through Rabbits.

The winners received a $1,000 grand prize and gave a brief video presentation on their Uganda trip and the reasoning behind their business plan.

The event concluded with a question-and-answer series with local business community speakers, including Brandon Bowling of Plumas Pines Resort, Dan Gallagher of Nakoma Resort, Richard Scully of Chamber Nation, Jeff Titcomb of the Indian Valley Chamber of Commerce and Sterling Sage, and Bink Huddleston of Hideaway Motel in Greenville.

Ending the day with refreshments and live music by local musician Jack Danny, attendees left with an overall sense of the current economic state of the county, areas for growth and inspiration to get there, and a newfound resolve to encourage open communication within the county.

This event was sponsored by the EPCC, FRC, California Centers for International Trade Development, Chalet View Lodge and Sierra Nevada Journeys. For more information on the topics covered at the Summit, contact the EPCC at 836-6811.