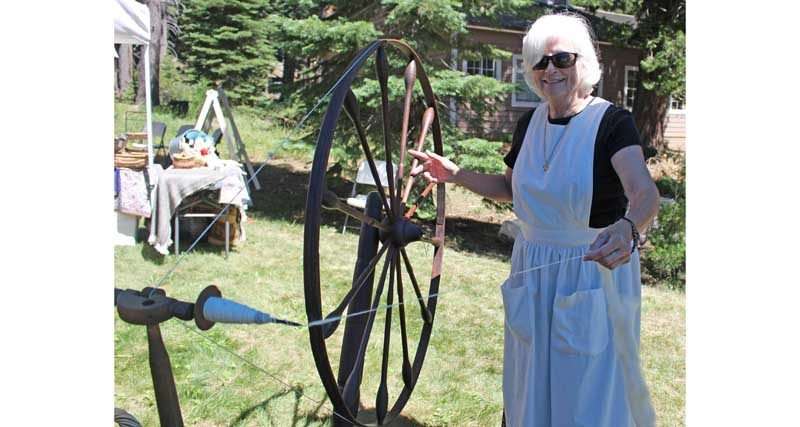 Janet Baldridge twists fiber into yarn with her 5-foot tall Great Wheel. Baldridge bought the antique wheel in Chico and believes it may have been constructed in the late 19th century. Photos by David Nickerson
News
August 1, 2017July 27, 2017 David Nickerson, Intern Staff Writer

On a bright sunny Saturday in Johnsville, two large black horses trotted toward the museum with a wooden carriage in tow, signaling the start of Johnsville’s annual Gold Discovery Days celebration July 15 and 16.

Campers and locals quickly descended on Plumas-Eureka State Park, and by 10:30 a.m., the sleepy museum was bustling with activity.

Men and women dressed from head to toe in old-time garb got behind their respective booths, and participants milled from station to station, getting a short glimpse of what life was like back in the 1800s.

Kids also rushed from station to station to fill out a stamp book that, when completed, won them a goody bag full of items donated by volunteers.

State park workers like Debra Cable, who manned the bustling archaeology table, guided adults and kids alike through various activities, which captured the history of the mill and the Gold Rush.

The small, refurbished blacksmith shop, which became a feature at Plumas-Eureka State Park after it was rescued from a ranch near Frenchman Lake, was open to the public, and volunteers showed how blacksmiths shaped metal and stone during the late 19th century.

The local Graeagle Lions Club also pitched in at the event by serving up burgers, chips and drinks.

The Lions Club’s chapter president Mike Kirk said that all the money the group raises at fundraisers like Gold Discovery Days goes back into the community through community projects and donation programs.

Across the street from the main park, the old Moriarty house was open for tours free of charge.

Many people who took the tour marveled at the old furniture and listened intently to the tour guides who explained the daily lives of former Johnsville residents back before the days of cars and stoves.

It might come as no surprise that one of the greatest hardships back then was the biting winters, which necessitated old-fashioned foot warmers and indoor latrines designed so that residents could avoid going out in winter storms.

According to park volunteer Tim Buckhout, the furniture inside the Moriarty house was moved there from other locations because it fit the general time-period and because it brought the vacant house to life.

Down the street and into the heart of Johnsville, the Johnsville Historical Society hosted a small art gallery in the local church featuring quilts from artist Ann Johnston that depict the Gold Rush and the old Eureka Peak mines.

Johnston said her current collection of quilts tries to capture old Gold Rush sites like Johnsville and Bodie, adding that she is looking for a new museum in which to showcase her work if any museum curators are interested.

The Johnsville Historical Society also sold books on the history of Johnsville at the church as well as delicious ice cream and dessert snacks.

Back at Plumas-Eureka State Park, the assay office was as busy as ever with tourists and attendees exploring the interior and asking about the office’s history.

Volunteer Cliff Romig explained that the assay office served to advise miners on where to dig for valuable gold by calculating how much gold existed in a given ton of rock.

“We were like the arrow in the mines pointing to the gold,” he said.

Toward the end of Saturday’s festivities, author Bruce MacGregor gave a well-attended lecture about his book “Plumas Eureka on Glass.”

In his lecture, MacGregor highlighted the rich diversity, which was a cornerstone of Johnsville and which he believes helped the town survive hardship.

He said that Johnsville was home to Germans, Slavs, Chinese, Anglo-Saxons, Swedes, Irish and Italians, adding that each group brought something different to the town and added to its rich culture and economic prowess.

The Italians, for example, developed a special technique that let them extract the last bits of valuable ore from the waste and pulp of the mines so that it did not have to be discarded.

Inevitably though, MacGregor explained that the fire that destroyed most of Johnsville in 1892 devastated the town’s future prospects and forced many residents to move on in search of a better life elsewhere.

The Mohawk Mill was also running low on high-value ore deposits by the time the fire swept through the town, leaving the residents with little hope for recovery after all the destruction.

Even still, MacGregor insisted that the Mohawk Mill should be looked at as a beautiful and valuable icon left over from a bygone age.

“The mill is the one standing icon left from that era,” he said. “It was truly a giant of the time.”

This year’s Gold Discovery Days certainly brought back a little bit of the luster of the old mill as attendees and volunteers alike tried to mimic individual pieces of the site’s grand history.