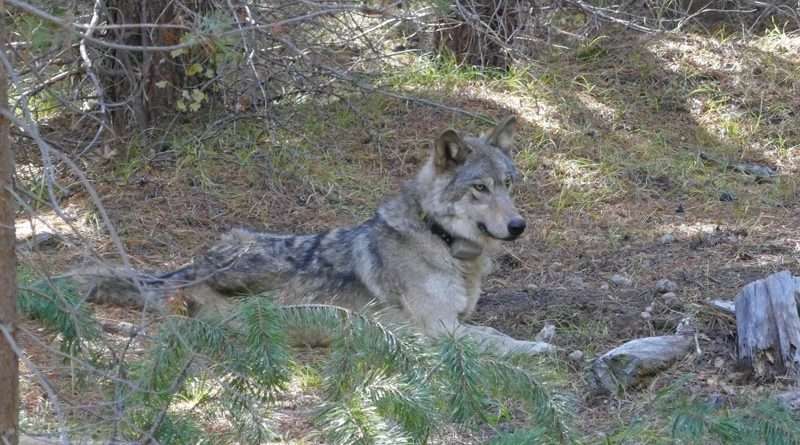 This photograph of a young OR-54, a descendent of the famous OR-7, the first wild wolf in California in nearly a century, was taken just after she was fitted with a GPS collar. Due to GPS data from her collar, she is believed to be the lone wolf responsible for the recent wolf kill and calf injury in Plumas County. Photo courtesy of U.S. Fish and Wildlife Service
News
September 4, 2019September 10, 2019 Sam Williams, Staff Writer

A lone wolf from Oregon killed a calf and injured another on public land in Plumas County.

According to a Livestock Loss Determination report on the California Department of Fish and Wildlife California Wolf page, on Aug. 16 a ranch hand on horseback responded to a calf in distress. He observed a wolf attacking a 2-month-old, 200-pound calf, and then chased the wolf away. The incident was reported to a United States Department of Agriculture Wildlife Services specialist who reported it to the CDFW.

OR-54, a dispersing wolf from the Oregon Pack and an offspring of OR-7, was confirmed in the area via GPS collar locations.

As a Wildlife Services specialist and a CDFW wildlife officer investigated, they discovered nearby clusters of OR54’s GPS points on Aug. 13 and Aug. 14. During the survey, they discovered two calf carcasses, each about two to three days old.

One carcass was half consumed with external tooth scrapes and punctures to the throat and left side. The other calf was about 95 percent consumed, and there was not enough of the carcass left to conduct a through evaluation.

The rakes on the injured calf’s throat and left foreshank as well as subcutaneous punctures and the presence of OR-54 indicate a wolf attacked the calf.

One of the carcasses had subcutaneous punctures and muscle hemorrhaging on its left side behind the front leg, throat and on the back as well as external tooth scrapes, indicating the animal was alive when bitten. The right flank between the front and rear leg also had subcutaneous and muscular hemorrhaging. GPS locations from OR-54’s GPS collar indicate she was near the carcasses Aug. 13 and 14 and in the injured calf’s area Aug. 16.

Kent Laudon, a wolf biologist with CDFW, said he was not part of this investigation, but he understands these calves are part of a herd of young calves and that makes them more vulnerable to attack. He said the mother cows generally will protect their young and will frequently chase the wolves away from the calves, especially if the pack is small. Laudon said he understands this injured calf somehow got separated from the rest of the herd.

Given the GPS data, Laudon said OR-54, a lone dispersing wolf and a descendent of OR-7, the first wild wolf in California in nearly a century, is most likely responsible for the attack.

OR-54 is  a 2 1/2–year-old female wolf and a member of the Rouge Pack from southwest Oregon. She left her natal pack in January 2018 and has made an estimated four trips to California where she has spent most of her time. Through June 2019, she’s traveled at least 6,600 miles, based on snapshots from her GPS collar.

Last summer she stayed around Sierra Valley, but this year she’s spending most of her time on the Plumas National Forest.

“Lone wolves tend to cause fewer problems than packs,” Laudon said, “but they certainly can” attack livestock. He said multiple attacks by a lone wolf such as this one are “more unusual.”

Laudon praised the ranch hand that heard the wolf attacking the calf and responding.

“He should get the cowboy of the year award,” Laudon said. “He heard the struggle, turned his horse around and went about a third of mile, saw a dust cloud in the shade, rode into it and was able to break up a wolf attacking a calf. He did a super good job. Those things don’t come up too often, but he reacted quickly and did everything right.”

Laudon acknowledged it’s difficult to keep an eye on livestock scattered across a large grazing area, but someone on the ground can make a big difference and maybe have the ability to deter or break up an attack.