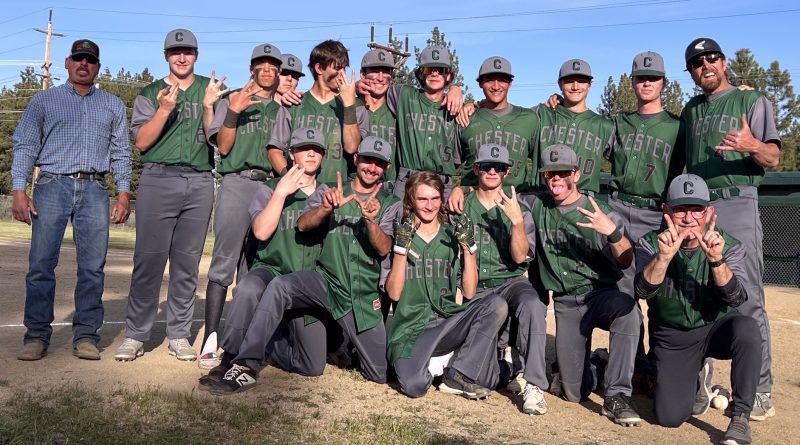 Chester Volcanoes took it all the way to Sectionals

So much has been happening in a flurry of activity with school ending and summer stepping into high gear with all events in a “Go ahead” status after a couple years of cancelations and uncertainty, but one thing we don’t want to overlook is the final playoff games for Chester and Portola High School baseball teams that started with the May 17 game.

“Let’s have a well-played good game!” said Portola head coach Tim Brubaker to Chester head coach Mike Klimek during the pregame meeting. “And such it was Coach Tim, excellent play by both teams,” said CHS assistant coach George Wellman at the end of the game.

The first playoff game took place between the Tigers and Volcanoes. It was as close as it could be with the Vols finishing victorious, 6-5. Tiger runs were scored by Tanner Carr, Magnus Berg, Cody Wilmer, Brad Silva, and Emery Powell. Portola RBIs came from Cody Wilmer, Michael Stewart, Sean Sheridan, and Cade Wilmer. Both the Wilmer boys hit a double. Carr stole a base and Cody Wilmer stole two.

Highlights from CHS head coach Klimek and assistant coach Wellman: “Senior Joey Tantardino, playing in potentially his last high school baseball game, led the Volcanoes to a victory going 3 for 4 with 2 doubles, 1 RBI, and scoring 2 runs. The most significant hit by Tantardino may have been a lead-off single in the bottom of the 7th inning with the scored tied 5-5 that was followed by a steal of 2nd base. Intentional walks to Juan Flores and Logan Oswold moved Tantardino to 3rd base. Tantardino alertly raced home from 3rd on an errant pitch to secure the 6-5 hard-fought win against a talented and tough Portola Tigers team. Connor Barr contributed at the plate with a HR and double, scoring 2 runs, with 2 RBI’s. Connor was ‘lights out’ coming in as relief in the 3rd inning, pitching 4.3 innings of no-hit ball, with 7 strike outs, and 1 base of balls, giving up no runs. Lucas Klimek added a triple, Jax Holland a double, Logan Oswold two singles, and Wade Neer a single to complete a 10-hit offensive effort for the Vols. Holland and Neer also scored a run apiece.”

“I so appreciate you Coach Brubaker, you are one of the good ones!” said coach Klimek after the game.” “Thank you, Michele Wellman for scoring the game. Kim Clark, thank you again for providing photos,” said coach Wellman. “The team so appreciates all of your contributions!”

The Volcanoes move up the ladder

Chester went on to play at Shasta College vs. Etna for the section title May 21. The final score of that game was Etna 10, Chester 0. Highlights from the CHS coaches: “Chester held the Etna Lions in check on one single through three innings, the score knotted at 0-0. Chester managed five hits through the 3rd inning, but stranded three base runners in scoring position, unable to break through with any runs. In the bottom of the 4th, Etna sent 12 batters to the plate scoring 8 runs on 8 hits, demonstrating why they were the #1 seed with talent and excellent coaching. The Vols played very well defensively without a fielding error, forcing the Lions to earn every run, as it should be in a section championship game.” Coach Wellman added, “Congratulations to Etna Head Coach Mitch Thackeray and Assistant Coach Cody Stacher, and to all the Etna fans I visited with before the game.”

The Vols managed a total of seven hits. Singles came from Neer, Klimek, Barr, Flores, Oswold, and Kooper Clark. A double was hit by Jax Holland. Klimek and Flores contributed a walk each.

“Two outstanding defensive plays, one by Kooper Clark on a hard-hit ground ball in the hole toward right field, making a sliding stop and throwing out the runner out while on his knees,” said coach Klimek. “Cayleb Clark in right field fought off a slicing wind-blown line drive to make a diving catch on a ball destined to be a double if not caught. It’s hard and it stings at this moment, but remember we set a goal and fought the entire season to get here, to have this chance,” said coach Klimek. “You proved yourselves worthy throughout the season. Today we honor Etna’s win and congratulate them. I’m proud of all of you!” “Outstanding season of baseball that came close to a section championship, following last winter’s basketball section championship, there is a lot to be proud of,” added coach Klimek.

“Thank you to Camille Klimek for scoring the game, and to all the Chester fans in attendance. I’m thankful and humbled by your dedication, commitment to these young men, and allowing me to be a part of their lives,” said Wellman.

The Vols finished their season with a 14-6 overall record, 6-2 in league, and second in Section VI. The Volcanoes had several impressive wins throughout the year against much larger schools. Chester High enrollment in 9-12 grade levels is slightly less than 80 students, while the average enrollment of opponents the Volcanoes faced is nearly 300.

Hendrickson pitched 4.2 innings to strike out 10 batters! James pitched 1.1 inning and struck out a Brave.

The Trojans move on to game two Sectionals with Durham