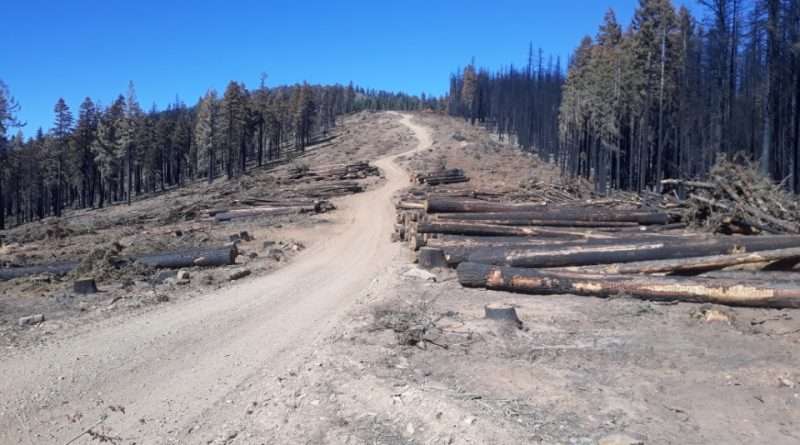 For the past month, I have been making multiple trips to fire lookouts along the Grizzly Ridge.  I started with Smith Peak four weeks ago;  then traveled to Argentine Rock, and today visited Mt. Hough lookout, approaching from the Quincy side.  Perhaps the most concerning message I can share with fellow Plumas residents is that the condition of the soils in these burned areas is so precarious that we in Plumas county would be wise to prepare for many travel disruptions this coming winter due to mudslides and rockfalls … and especially if we have a heavy wet winter.

From the upper vantage points of these fire lookouts, it appears that the overall damage to Plumas forests is approximately 60 percent of the landscape.  There are some viewsheds, such as in Quincy and American Valley, where there is little or no visible evidence of the Dixie Fire.  There are other areas with total devastation for many square miles.  And there are many areas where the burn destruction is 50 to 60 percent.

I encountered multiple locations where the road I traveled was obviously connected to the Dixie Fire.  Above the Argentine Rock lookout, at approximately 7,800 feet in elevation, there was a road running for  several miles just below, and parallel to, the ridgeline.  This road was clearly the fireline used for the huge backburn which deflected the Dixie fire away from East Quincy and Greenhorn, and toward the eastern desert. Trees had been cut and stacked 25 to 100 feet from each side of the road, both sides were sprayed with retardant, and then the backfire was lit on the upslope side of the road which rose to the ridgeline. This was a massive scale operation which happily was successful to protect these communities.  Thank you, firefighters!

On the way to Mt. Hough lookout today, there were massive fire scars on either side of the road just above where the China Grade from Taylorsville meets with the Mt. Hough Road from Quincy ( approximately 6,500 feet in elevation).  The Fly Fire tore through this area, and there are extremely steep slopes along the roadside which have been ground to powder by the combined effects of the fire, vehicle travel, and the recent clearing of dead trees alongside the road.  There is no vegetation in place to hold these soils against the onslaught of a wet winter, and a heavy rainfall in this area will likely cause the roadway to be completely washed out.

Seeing these extremely poor conditions of fire impacted soils up close makes for a strong argument that there will be many problems with mudslides and rockslides along the roads and highways crossed by the Dixie Fire.  Such powdery soils will easily erode around rocks, and boulders may frequently tumble down mountainsides in the coming months.

Drivers will want to use extreme caution at all times this winter, especially at night and during inclement weather. Keeping emergency gear in one’s vehicle is a standard practice for any winter in Plumas County, and especially for this coming winter. The same is true for emergency preparations at home.  Keep generators operational, have lighting and heating options if the electricity goes out, keep a reasonable supply of food on hand, and never let the gasoline gauge go below ½ a tank on your vehicles.

In short, it is very possible that Plumas County could experience as much disruption to local travel from rock and mudslides this winter, as was experienced during the fires this past summer.

I saw two bears today on Mt. Hough, one being a close encounter as little as 10 feet apart. This close encounter bear was approximately 250 lbs., and appeared to be greatly fatigued, hungry, dehydrated, and disoriented.  After slowly circling for a couple of minutes, the bear began to slowly approach me, and in a friendly manner. However, I did not want to risk possible unexpected behavior with a wild animal of this size having very sharp claws which appeared to be six or more inches long. So, I stood tall, waved my arms, and politely asked the bear to leave.  The bear immediately turned and moved away, but disappointed at not having not found food, water, or fellowship.

It was this moment that I began to consider how many similar four-legged fellow fire refugees are currently wandering the mountains of fire ravaged Plumas county. I wish I could help these fellow refugee creatures, but I am barely making my own way through this abrupt eviction by Mother Nature.