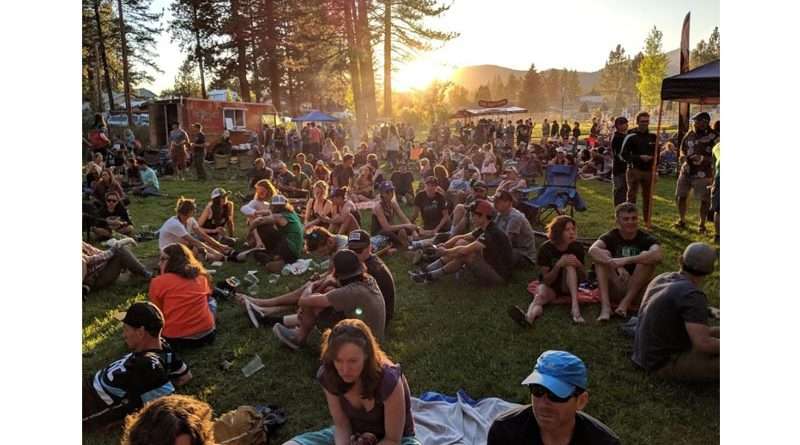 Lost and Found Gravel Grinder riders enjoy the after-party at the Portola Park at last year’s event, with hundreds anticipating the festivities to come with the revamp of the event’s location to occur June 1. Photo by Patrick Cavender
News
May 13, 2019May 9, 2019 Kurt Gensheimer, Writer/Trail Whisperer, Sierra Buttes Trail Stewardship, Special to Feather Publishing

Celebrating its sixth year of rugged and beautiful back road adventure in the Lost Sierra, the Lost and Found Gravel Grinder is moving the start and finish of the event to the city park near downtown Portola, where last year’s awards ceremony and free live music were held.

This is a huge step forward for the event, but some folks have asked why Sierra Buttes Trail Stewardship (SBTS) is moving the event from the beautiful and serene shore of Lake Davis.

There are a number of reasons why SBTS has chosen to move the event, but the two most significant are that the Lost and Found has grown too big for Coot Bay on Lake Davis, and more importantly, moving the event better aligns with the mission of the Sierra Buttes Trail Stewardship.

A central element in building sustainable recreation-based communities is showcasing the communities of Plumas and Sierra County whenever possible. The Downieville Classic is a perfect example of this showcase, as the town of Downieville is ground zero for the event’s festivities. Visitors get a good taste of the town, all its character and rich history.

Last year the post-ride festivities in Portola featured the first Lost and Found kid’s race in the City Park. This event was a spectacle to witness, as the local community youth and event participant youth from out of town came together and rode together on new flow trails that SBTS built in partnership with the city. The smiles on the faces of local Portola residents made SBTS realize how important it was to bring the event to town.

In the case of Lost and Found, the city of Portola has its own unique character and history and has been an invaluable partner in helping build and support the event. The city’s financial and logistical support, along with its beautiful location near the headwaters of the Feather River — one of few Wild and Scenic Rivers in America — makes it an ideal location to host an ever-growing number of cyclists during event weekend.

As a bonus, finishing in Portola gives riders a long descent from Lake Davis to a gently rolling bike path along the Feather River all the way to the finish line.

“The city of Portola appreciates the opportunity to partner with the Sierra Buttes Trail Stewardship in support of the Lost & Found Gravel Grinder,” said Leslie Chrysler, Interim City Manager. “The event brings significant local, economic value and gives Portola the pride of sharing a new, unique community with recreational enthusiasts and families. This event also engages and includes local residents in the kid’s bike race, and the festival with the Beverage Garden and live music.”

The Lost and Found started in 2013 with only a couple hundred riders. At the time, staging everyone out of Coot Bay on the shore of Lake Davis made sense for the event and for the riders.

As the cap of 1,600 riders in 2019 has already been met and all tickets sold out, this grassroots event has outgrown the tiny day-use area of Coot Bay, and the city of Portola has welcomed The Lost and Found Gravel Grinder with open arms.