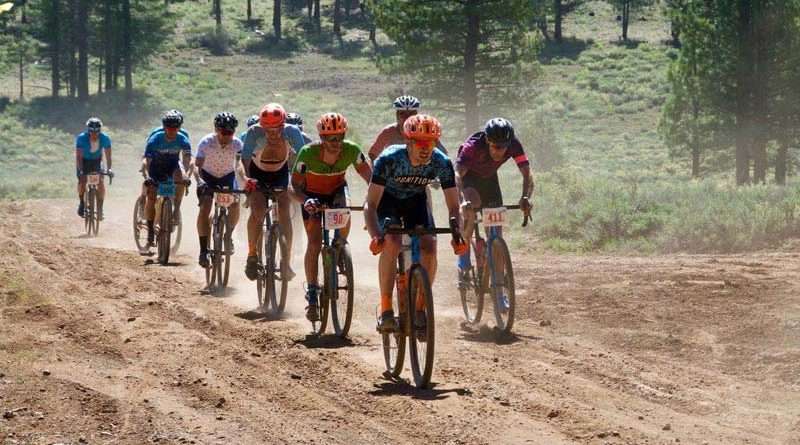 The 1,250 100-mile riders in the first jewel of the triple-crown bike competition, Lost and Found, were greeted with a clear day for riding June 2. Competition ran about as smoothly as a Gravel Grinder can thanks to the skill and expertise of organizing staff.

“Beautiful weather, good reviews,” said volunteer Linda Cooley from “I” station at the 45-mile cutoff. Members of the Portola Rotary Club and the Portola City Council staffed the “watering hole” as Cooley described it. “We were not an Aid Station … but we certainly treated many ‘road rash’ victims,” said Cooley.

The Lost and Found Gravel Grinder is one of three local, but internationally recognized, rides hosted by the Sierra Buttes Trail Stewardship. “The racers were very excited about the course; there were some terrible ruts and rough going, but most seem to think it was great,” said Cooley.

An enormous crowd filled campgrounds to capacity at Lake Davis and cars lined the surrounding roads for this year’s Gravel Grinder race near the city of Portola.

The event has grown since the inaugural ride five years ago. “This year we had 1,250 [riders] registered,” said SBTS Board President Jesse Passafiume. “Our first year we had 204 riders.”

Volunteering at the Net Control station with Ham Radio Club President Nora Barnum was Larry Trotter. “We started out at 5 in the morning and finished at 8:30 p.m. It was a very long day,” said Trotter. Twenty radio volunteers worked at Net Control to keep race-day communication open. They were located next to Fire Control.

Pro Men’s racer Tobin Ortenblad had the fastest time, finishing in a speedy 5 hours, 35 minutes in front of 26 other professional riders. Second-, third- and fourth-place riders each finished within a single minute of each other: 5:36, 5:37 and 5:38. Competition was that tight.

Fourteen riders rode in the 100-mile Open Single Speed race with Corey Hanson coming in first with a time of 6:21, followed by the next three riders within less than 13 minutes.

The 100-Mile Jr. Men, ages 13-18, had five competitors with times ranging from 6:52 for first place Tydeman Newman to the last rider coming in at 8:44. Second place was a tie with Korbin Moorehead and Myles Morgan both coming in at 7:15:39:2. Tough finishers!

Fifty-eight men competed in the 100-Mile Men, 30 and under, with a best time of 5:56 from first place finisher Emile Goguely. Patrick Huibregtse placed second in 6:25 leading a pack of six riders on his tail finishing within the following nine minutes.

Four women 30 and under were led by local athlete Dana Ludington who brought in a 100-mile time of 8:59 followed by Ellen Everidge at 9:01.

There was one tandem bike, with double the power and double the weight, on the trail making a very good time of 7:37.

The fastest average mile was clocked at 3:22 by winning pro Tobin Ortenblad and the longest mile average time was found in the men’s 30 and under category at 6:01. There were no “slowpokes” and no picnics were held on the course. “These are all hardcore athletes,” observed volunteer Trotter. Endurance was a huge factor in completing the ride.

The longest amount of time spent on the route was 10 hours. “We saw people bleeding from every appendage that went on to finish the race,” said Trotter.