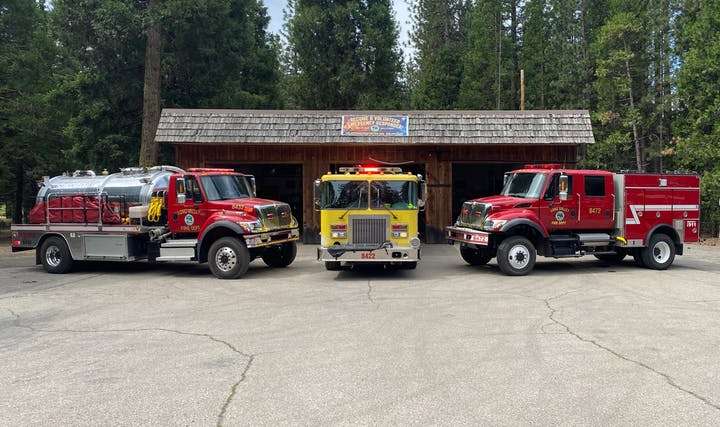 Long Valley Fire Department is asking for its first rate increase since 2005. Long Valley Fire Department serves the greater Cromberg/Sloat area. Photo courtesy of Long Valley Fire
News
July 9, 2021 Editor
The Long Valley Community Services District Board hopes community members will be willing to pay an additional $85 a year to keep their volunteer fire department in business.
At its June 8 meeting, the district’s board of directors voted in favor of a resolution to increase the special tax that residents pay to fund Long Valley Volunteer Fire Department. If the resolution is approved by the Plumas County Board of Supervisors, it will be placed on the November ballot and would require approval from two thirds of the district’s voters.
During discussion the board members noted there hasn’t been a fee increase for 16 years. For the past several years, the LVCSD has been forced to spend money from its reserves to meet the annual budget.
The board voted to approve a “bare bones” $33,000 budget for the 2021-22 fiscal year. The district currently receives about $18,000 annually. That forces the fire department to use reserves to make ends meet and doesn’t allow for emergency repairs.
“We deliberated long and hard about asking for an increase” Board Chairman Steve McDowell said. “But at the rate we are going we will be out of money in a few years.”
The all-volunteer department, led by Chief Steve Peters, currently has seven firefighters. In an average year they respond to nearly 100 calls — about 90 percent of those are medical.
Having the fire department in the neighborhood also helps keep down the rising cost of home owner’s insurance. “If the fire department wasn’t here the price of insurance would likely skyrocket. That’s assuming you could find insurance at all,” Peters said. “And first responders would be traveling from many miles away.”
If voters approve the increase it would take effect in the 2022-23 fiscal year, and would raise the annual tax to $170. That figure shows up on residents’ annual property tax bill.
The $170 fee would still be less than the average amount other districts in the county receive — and well below the average tax paid by metropolitan property owners in the state.
The proposed increase would give the Long Valley Fire Department about $39,000 a year. The board said that would cover the budget and provide money to pay for repairs and improvements to its equipment and the fire house itself, which could soon need a new roof.
“We believe the fire department is extremely important to this community,” Board Member Dan McDonald said. “When it comes time to vote, we hope the property owners in our district feel the same way we do.”
In addition to McDowell and McDonald, the LVCSD board includes directors Barbara Jean Castagnoli, Greg Kneisel and Jonathan Sprague. Alice Parlier is the secretary and treasurer.