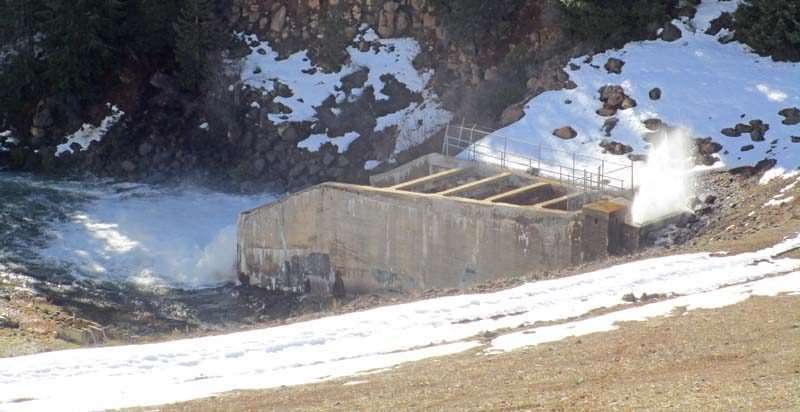 When water began to spill over the crest of the Oroville Dam’s emergency auxiliary spillway Feb. 11, nearly 190,000 people living in low-lying areas beneath the dam were ordered to evacuate, with officials fearing that a catastrophic collapse of the concrete wall on top of the emergency spillway could result in an overwhelming release of water downstream.

Oroville Dam, completed in 1968, is an earthen embankment dam on the Feather River east of the city of Oroville in Butte County. At 770 feet high, it is the tallest dam in the U.S.

PG&E, owner of Lake Almanor, has stayed in communication with the California Department of Water Resources during this period, as it does throughout the year, said Paul Moreno, PG&E spokesman, to coordinate and manage water flows through the Feather River system.

“This has been one of the wettest years on record,” Moreno stated, “which means a lot of water is moving down the Feather River and impacting everything in its wake.”

He said it’s important to note that the primary function of PG&E’s dams along the Feather River is to divert water through a number of powerhouses, which is then discharged back into the river.

There’s really very little actual storage capacity beyond Lake Almanor and Butt Lake, Moreno noted and said, “The other dams we have along the North Fork of the Feather River are small diversion dams that are also currently full because of the wet weather we’ve had this winter season.”

Lake Almanor, the major upstream reservoir in the Feather River system, is itself near full capacity, Moreno reported.

He said that the maximum level for Lake Almanor is 4,494 feet in elevation above sea level, with the water level currently at 4,492.7 feet as of Feb. 16, just 1.3 feet under full capacity.

With more rains in the forecast expected, Moreno said, “We’ve been moving more water out of the lake at the rate of 1,700 cubic feet per second,” an increase from the 840 cubic feet per second that was being released just two weeks earlier, “and we’ll be increasing that outflow even more to try and stay ahead of the rains.”

An increase in the outflow means more water will flow downstream toward Oroville Dam. But Moreno said that shouldn’t be a problem. “Bear in mind, that with the recent storms the average inflow into Lake Oroville peaked over the weekend of Feb. 11 and 12 at 180,000 cubic feet per second,” before slowing to just 100,000 cubic feet more recently, “so the amount of water being released from Lake Almanor is not a significant percentage of what’s now flowing into Lake Oroville reservoir.”

DWR is currently working to keep up with the inflow from rain and snow melt runoff by releasing at least 100,000 cubic feet of water down the damaged concrete spillway at the Oroville Dam site, said Moreno.

The goal is to bring the water level below 50 feet or more from the crest of the 901-foot high emergency auxiliary spillway, which had been heavily eroded.

As a precaution and to avoid future problems, Moreno said that PG&E is in the process of de-energizing the two electric transmission towers that are situated near the dam’s emergency spillway, and will soon be installing 12 power poles further downstream as a temporary fix to provide electric power away from the impacted areas until a set of new towers can be constructed outside the path of the spillway.

In the meantime, power has been re-routed so Oroville residents have not seen any interruption in their electric service, he said.

Moreno added that with continued monitoring and actively managing water levels, he sees no danger of Lake Almanor overflowing the way it did at Oroville Dam, even with more rain and snowfall forecast in the coming days and weeks.