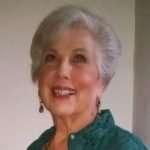 She was born on December 7th, 1935 in Pasadena, CA to Vera and Max Foerster and attended high school in Pasadena.  She later obtained a Registered Nurse degree from Mount San Antonio College.  She then began her career in nursing, working for Pomona Valley Hospital and other health care facilities in Pomona, and later in Chester, CA.
She married Edwin Sherman Butler on March 7th, 1952 and together had four children.  Ed and Peggy raised their children in Pomona, CA, then both semi-retired and moved to Lake Almanor Peninsula in Northern California where Margaret served as an EMT and worked part time at the local hospital.

A very artistic person, she loved to explore all mediums of art and especially excelled at needlework and quilting.  She loved decorating her home, and holidays were filled with decorations, many made by hand, home cooked meals and lots and lots of love.  Margaret and Ed’s door was always open to extended family, friends and neighbors.
A fearless adventurer in travel and outdoor activities including waterskiing, hiking, parasailing and snowmobiling, she was given the nickname of “Evel Knievel”.

She loved her family and became very involved in ancestry, reaching out and connecting with many family members who had lost contact with each other.

She was also a fantastic baker and cook.  Her biscuits were known affectionately as “hockey pucks”, but she perfected them in time.

It was not uncommon for Margaret to hop on a plane at a moment’s notice to fly to a family member or friend who had lost a loved one, was ill, or had any life crisis, where she would jump right in cooking, cleaning, caring for children, organizing and consoling.

A small family memorial will be held in San Angelo with a memorial and burial to follow in Chester, CA. Margaret will be laid to rest beside her husband Edwin, son Stanley, daughter Nancy and Nancy’s husband Douglas Munns. Arrangements under the direction of Johnson’s Funeral Home of San Angelo, Texas.

In lieu of flowers, the Butler family asks that you make memorial donations to Hospice of San Angelo, 1933 University Ave, San Angelo TX 76904.  The family would like to thank Barbara Castellano and her team of caregivers for their consideration, kindness, patience and love.