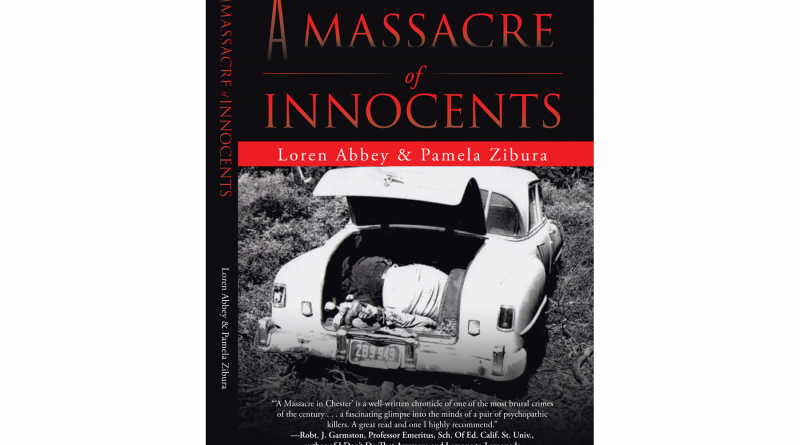 In 1952 on a highway near the outskirts of Plumas County, in the small Northern California mountain village of Chester, a local businessman, Guard Young, and three of his young children, sisters Jean, 7, Judy, 6, and Sondra, 3, and a neighbor boy, Michael Saile, 4, are carjacked, robbed and savagely bludgeoned by the so-called Mountain Murder Mob.

Young and three of the children are killed, but Sondra managed to survive the attack.

Thus begins the premise for the real-life crime story, “A Massacre of Innocents,” by Roseville resident and author Loren Abbey, with research by South Carolina native Pamela Zibura, published last year by iUniverse.

At the time, Abbey said that Young owned a food store with his wife; Young’s Supermarket, which is today a sporting goods emporium called Sports Nut in downtown Chester.

“Chester didn’t have a bank at the time,” Abbey discovered in his research, “so Young took on the responsibility of taking all the payroll checks from the Collins Pine Company, as well as from his own business, to the town of Westwood every Friday to be cashed.”

Abbey said it was widely known by everyone that he made the trip on a regular basis; even the sheriff at the time warned Young to take more precautions, “as he was a potential target for robbery.”

One fateful day, “Young went to the bank and took the children with him. He would always buy the children a treat,” he said.

“Young had around $7,000 in cash after cashing the checks,” Abbey remarked, “but as they made their way back to Chester, he and the children were abducted” after being pulled over by the thieves.

“He would have gladly given them the money, as his concern was for the safety of the children,” Abbey said, “but the gang decided to kill them all.”

According to Abbey, the book also connects the terrifying tale five months after the Chester murders by the Mountain Murder Mob, with the quiet Southern California city of Burbank rocked after an elderly widow is found bound, gagged and brutally put to death in her own home.

In addition, Abbey said the story ties together the killing of a Folsom gold mine operator named Edmund Hansen in a home break-in robbery attempt by gang members Perkins and Boles. In the confusion, Boles shot Hansen six times, while Mrs. Hansen escaped through the back door.

Boles was later arrested for trying to cash a bad check, and confessed to the murder in Folsom, Abbey noted. “For a lesser sentence, he implicated his confederates in the Chester killings, although he didn’t participate in the slayings himself.”

The three remaining defendants were tried in 1954, two of whom were convicted and sentenced to death, and later executed by cyanide gas at San Quentin State Prison. “Harriet Henson was sentenced to life in prison, but was paroled after serving just seven years,” he said.

Abbey, quoting from his book jacket, said that, “The shocking chronicle of the Mountain Murder Mob’s deadly rampage through the Golden State — from the gritty back alleyways of the mean streets of Los Angeles suburbs to the forested foothills of the Northern Sierras — depicts the ruthless killers plying their murderous trade preying on society’s most vulnerable citizens,” until investigators track down the rampaging gang to bring them to justice.

The book was a result of six years of hard work and detailed research, Abbey recalled, using county court records in Chester, Quincy, Los Angeles and San Francisco, including a lot of information obtained from newspaper articles written at the time of the trial.

“To my knowledge, ‘A Massacre of Innocents’ is the only meticulously researched account that has ever been published on this subject: how and why it happened, the events that led up to it and then, followed to its conclusion,” noted Abbey.

Continuing, “I have no doubt that this book will appeal to readers in both Chester and the wider region because of its local flavor. It could be of particular interest to those who are still alive and who actually remember the infamous October day in 1952.”

Readers can find the 354-page, “A Massacre of Innocents,” including numerous photographs, available in hardback, paperback or eBooks at: amazon.com/Massacre-Innocents-Loren- Abbey/dp/1491760249. Or purchase the book at: amassacreofinnocents.com/.

Loren Abbey has been a prolific blogger and contributor to a number of periodicals and trade journals. A former Silicon Valley executive, he is now retired, residing in Roseville.

Pamela Zibura is a successful realtor and mother of four grown children. She resides with her husband Tony in South Carolina near the historic antebellum city of Charleston. “A Massacre of Innocents” is her first book.