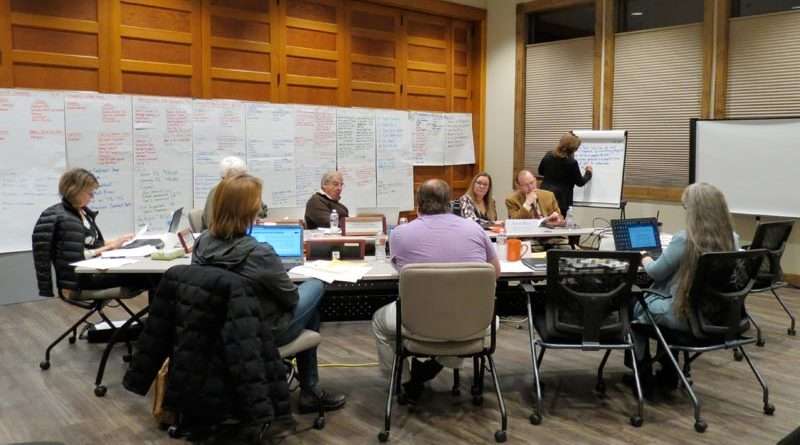 A discussion of Measure B projects dominated the Plumas Unified School District Board Of Trustees meeting Jan. 15 — not only which ones will receive the green light, but what process will be used to select them.

Topping the list of priorities going into the evening was a new heating system for Quincy Junior Senior High School, which would incorporate a biomass boiler, plus two additional boilers. The project would include construction of a new building and the equipment. The initial cost estimate hovered around $6.5 million, but when Superintendent Terry Oestreich said that the project should include replacing the existing piping believed to be under the floors, thus increasing the cost potentially to more than $12 million, the trustees balked.

Oestreich said that it would be difficult to get a warranty on a new system if the old pipes weren’t replaced.

Immediately the trustees expressed concern. Leslie Edlund wanted to know if it could be verified that the warranty would be void.

Dwight Pierson asked if a propane system would be less costly than biomass.

And Joleen Cline suggested that rather than replace a system that would heat the entire campus, individual HVAC systems could be set up on each building or wing, with ducting that could run through the attic. She said such systems have been installed recently in Reno with great success and at considerably less cost.

Oestreich noted those questions and more and said she would get answers for the trustees.

A similar situation played out with regard to Quincy High School athletic fields. The trustees had asked for creative solutions to fix the fields, but within a $2 million budget, not the $6.5 million originally estimated. “We were looking for some out-of-the-box thinking,” Leslie Edlund said. “Not just taking the critical parts out. For example, there’s no grass,” she said of the latest proposal.

“They did nothing creative,” Dwight Pierson agreed.

Oestreich told the trustees that the real concern with the ball fields is the state of the soil.

“Why aren’t we looking at turf?” Cline asked.

Trustees did make a decision on Greenville High School and authorized the removal of a tennis court to ease drainage issues that affect the gym.

A new roof was approved for the media center next to the district office in Quincy, and at Quincy Elementary School, a contract to fabricate rain water leaders (the pipes that connect the downspout to the storm drainage system) was approved.

A longer discussion ensued on how the projects should be managed moving forward and what would be most cost effective — the district acting as its own general contractor with a project manager or taking a more traditional approach.

The costs of special education are going up, but state and federal funding is not. That meant a $1.7 million infusion from the school district’s general fund to pay for services for one year.

Kevin Bean, who oversees the district’s special education program as its SELPA director, shared with the trustees the escalating costs and the steps the district can take to reduce them, while adhering to all requirements and providing for the needs of the students.

“We have had several high needs students move to the county,” Bean explained.

The district must follow a formula for its annual spending based on one of four options, all designed to maintain the same minimum level of funding as the prior year. There are some exemptions though: decreased enrollment, voluntary staff departures, students aging out of the district, and termination of expensive equipment or facilities.

The district will work to control costs while seeking to secure more funding from state and federal sources.

The trustees voted to support California Proposition 13, School and College Facilities Bond, which will appear on the March 3 primary ballot.

The bond authorizes $15 billion in general obligation bonds for school and college facilities, including $9 billion for preschool and K-12 schools, $4 billion for universities, and $2 billion for community colleges.

Of the total, 9 billion would be earmarked for preschool and K-12 sites, both for new construction and modernization.

Californians last voted on a school facilities bond measure (Proposition 51) in 2016, which passed with 55 percent of the vote. That bond issued $7 billion for K-12 education facilities and $2 billion for colleges.