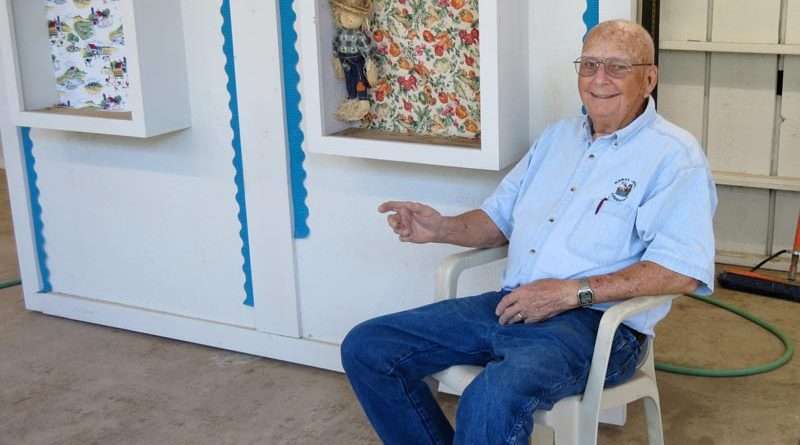 Fred Surber is quick to respond when asked about his favorite food and exhibits at the annual Plumas-Sierra County Fair.

Surber, who is the 2019 Fair Parade grand marshal, has had plenty of time to form an opinion.

Professionally, and in retirement, he has spent nearly five decades working in some capacity with the fair.

Exactly one week before the fair got underway, Fred took a break from putting the finishing touches on the horticulture building to talk about his selection as parade ground marshal and his work.

“I was very humbled when Susan Scarlett called me,” said Surber of the call he received from the Quincy Chamber of Commerce representative.

He will ride in the parade in a Model A driven by Jack Brumit, with granddaughter Melissa by his side, and then hurry back to the fairgrounds to ensure that the horticulture building is ready for the day.

The horticulture building — featuring fresh vegetables, plants, cut flowers and table settings — has been Surber’s responsibility since 1996, the year he retired as Plumas County’s agriculture commissioner.

The horticulture building and its adjoining family gardens were familiar territory to the Surber family.

“We had one of the family gardens when the kids were in high school,” he said of the initial involvement. “And we just kept at it after that.”

“We were really a team,” Surber said, acknowledging that it took some time to get used to running the horticulture building without her by his side.

It took some time for fairgoers as well, who were accustomed to being greeted by the popular husband and wife duo.

He has honored her contribution and her memory by planting two decorative trees and installing a piece of granite with a plaque on it near the fairgrounds’ entrance. It refers to her as “the flower lady.”

On the day of this interview he is also wearing one of the four shirts that she embroidered for him. They feature the fair logo on the front and flowers across the back.

Though he no longer has his beloved Sharon by his side, Surber can count on the annual assistance of his children. Daughter Cathy and her husband and granddaughter make the annual pilgrimage from Chicago to assist, while daughter Karen prints all of the placards that are needed to identify the categories of fruits, vegetables and more. Son Tim helps out as needed, including searching for the marble for Sharon’s plaque.

Then there are all of the people who have come to know Surber over the years and do whatever they can to assist.

During fair week, Surber arrives at the horticulture building by 7 a.m. to begin accepting entries for the day’s categories. He will stay through judging and then home for lunch and a midday break. Then he’s back at his post to greet visitors, and keep an eye on the exhibits.

Though fair week is flurry of activity, he has been appearing most days at the fairgrounds since early February, when he plants the first flower seeds in the greenhouse and nurtures them for the next six months.

The flowers are then planted around the grounds and if all goes well, are in full bloom for the fair run.

As this fair gets underway, Surber is asked if he has any memories of a standout entry from years past.

“There was this family from Calpine, and the mother and every one of the kids (there were four or five) entered cut flowers and dried and fresh flower arrangements,” he said. “Even the father came. He didn’t enter anything, but he herded the kids around.”

Surber was impressed that the family made the long drive from Calpine to participate and the effort it took to assemble all of the exhibits.

He also appreciates local residents, such as John Gallagher from Meadow Valley, who enter his vegetables regularly.

“It takes a lot of work to do a garden and then go out and select the veggies and then bring them into the fair,” Surber said.

Possibly for that reason, entries have dwindled over the years.

“In 1970 everyone had a garden,” Surber said of the year he arrived in the county. “But the demographics have changed, with both husband and wife working, there is less time for gardening.”

Though Surber said that trend maybe starting to change and he has noticed that 4-H is beginning to emphasize gardening.

But there is still a lot to see in the horticulture building and Surber looks forward to talking with the people that he only sees during the fair. “It’s like old home week,” Surber added.

The parade will go down Main Street in Quincy this Saturday, Aug. 17, at 10 a.m. Shout out a “hi” to Surber as he drives by or stop by the horticulture building and visit with him in person.”

According to the Quincy Chamber: “Fred Surber is one of those rare individuals that requires no thanks or recognition, but gives his time, energy and talent toward creating a beautiful space for us all to enjoy in the summer through his many years of service by gardening at the Plumas-Sierra County Fairgrounds.”