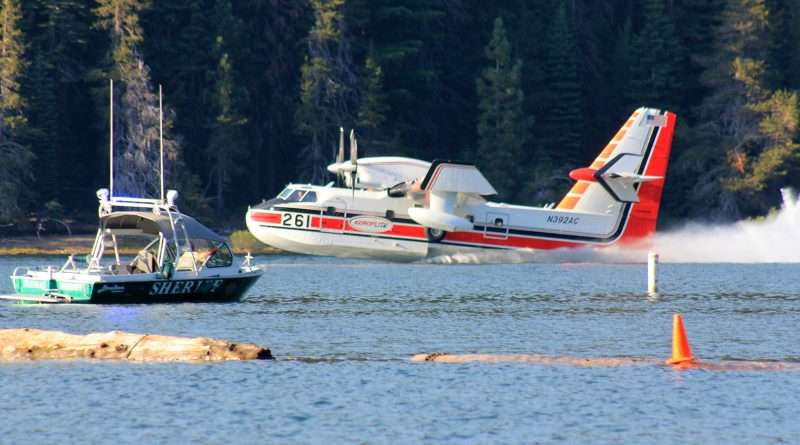 A familiar sight on Bucks Lake for the past few days as a plane scoops up water to deliver to drop on the Minerva Fire. Photo courtesy of Asil's photography
News
August 2, 2017August 10, 2017 Editor

7:30 p.m. update: A severe weather alert has been issued for the next hour. Quincy is experiencing thunder and lighting, as well as wind, and some rain has been reported. The weather has forced the air attack to quit for the night. We hope the fire crews who are out on the fire in these conditions remain safe.

1 p.m. update: The daily 11 a.m. briefing held at the Sheriff’s Office today will be the last one – at least for a while. That’s because the immediate threat of evacuation has ended. It was also decided that the evacuation center, which had been on standby, could be shuttered for the time being. Fire officials reported that while the fire has grown, the fire line that has been built is holding well, and good hand line is being added to accessible areas on the fire’s perimeter.

However, the Minerva Fire is losing some air resources to fires that are posing a more immediate threat to communities. That means that while the firefighters will continue to directly fight the fire where they can on the ground, the air attack needed to reach the more rugged and remote areas won’t be as available. Fire officials are considering the indirect method of setting back fires to stop the main fire’s spread. The edge of the backfire line will be within one-half mile of East Quincy, which fire officials acknowledge could make some residents nervous. If that step becomes necessary, then structure protection units will be positioned strategically in East Quincy. It’s anticipated that if that option is selected, it wouldn’t happen for four to five days.

In the meantime, officials are encouraging residents to breath easier, though that’s not a literal comment, since there is so much smoke in the air, and if backfires are required, that smoke will intensify. The Plumas County Health Agency has issued an air advisory due to the smoke. It’s likely that there will be smoke in the air for weeks, and that pockets of the fire will remain active until winter weather arrives.

While some of the structure protection units that have arrived from other communities are beginning to be released to go home, there are still ample trucks and personnel to patrol neighborhoods and safeguard structures. A number of local businesses have offered free drinks or a place for firefighters to relax.

St. John’s Catholic Church announced that its hall is open around the clock for firefighters. It is stocked with drinks and offers free wi-fi. The hall is located across the street from the Forest Service Offices on Lawrence St.

8:30 a.m. update: The Forest Service reports that the fire activity remained constant throughout the night with moderate growth. The fire now stands at 1,700 acres and is considered 30 percent contained.

Check out today’s newspaper for more fire info and a special insert that opens to a thank you poster for the firefighters that can be placed in a window.