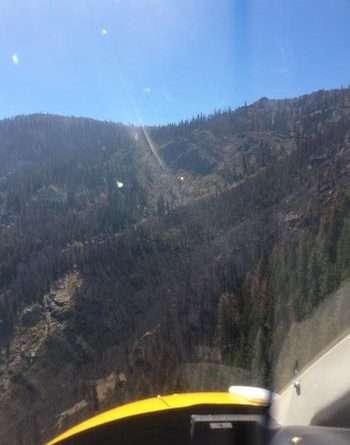 The two terms – mop up and patrol status – dominated this morning’s briefing on the Dixie Fire – in particular for all areas impacting Plumas County.

As of this morning, Sept. 12, the fire is 960,213 acres and 65 percent contained. (Most of the growth in the past couple of days has come from the area burning in Shasta County.) During last evening’s briefing, presenters stressed the calming effect Friday’s rains had across the fire.

Following is a brief rundown of points across the fire:

Devil’s Punchbowl and Grizzly Mountain: The Beckwourth and Elk Mountain Hotshots are going direct on the fire’s edge and last night were able to bring down a couple of snags that could have rolled across the control line. The Hotshots will continue to patrol and address any issues within the area that threatened Taylorsville, and potentially East Quincy, for weeks. Their goal is to obtain 50 feet of depth from the control line.

Grizzly Ridge: Firefighters are patrolling and mopping up — shooting for 150 feet of depth from the line.

Lake Davis area: Resources continue to patrol and mop up. No smokes were visible within 50 feet of the line.

From Dixie Valley to Dixie Mountain: Resources are mopping up and addressing hotspots. They have been able to gain a depth of 50 feet from the line.

Below Dixie Mountain: This is steep rocky ground. Yesterday no smokes were showing, but crews will be doing another patrol today.

Area butting up against the Beckwourth Complex: No issues or threats to control lines.

Along the 395 corridor by Black Mountain: This area is in patrol and mop up status. Shooting for 150 feet of mop up.

Janesville: The Honey Lake Group is patrolling the area. There are a couple of smokes in the interior, but no threats to the control line.

Antelope Lake: This area is in patrol status with no reported smokes.

From Dyer Mountain Area to around Lake Almanor: Beginning to sound like a broken record, but it is in patrol and mop up.

The entire southern edge of the fire from its start: Patrol and mop up.

As firefighters continue to gain containment of this fire, updates will be presented as needed and news coverage will shift focus to restoration and rebuilding.