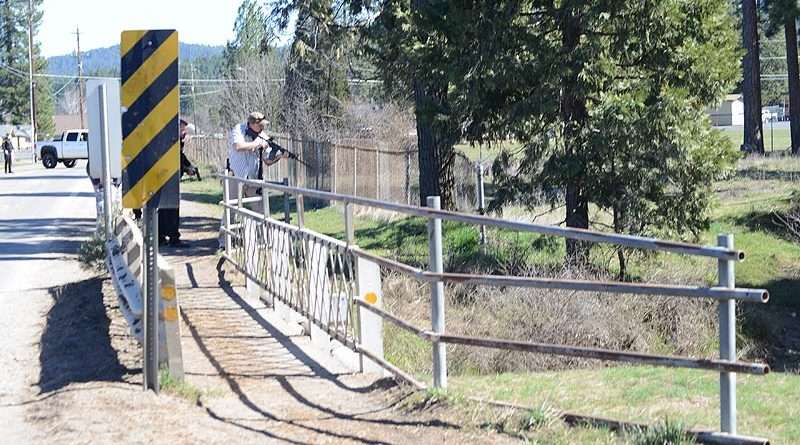 Backed up by Plumas County Sheriff’s Sgt. Chad Hermann, Det. Kris Frazier takes aim and eventually takes a shot at a large mountain lion as it came out of hiding from a clump of brushes along Mill Creek right near the bridge on Lee Road on Thursday, March 12. Photos by Victoria Metcalf
News
March 18, 2020 Victoria Metcalf, Assistant Editor

When the Plumas County Sheriff’s Dispatch Center reported that someone was trying to rundown pedestrians on Lee Way, I instantly thought it was bad.

As that scene played out and ended with an arrest without anyone maimed or killed, I went back to attending the list of stories I was writing for the following week’s newspapers.

It wasn’t long before dispatch revealed a report of a mountain lion in a tree. Did I hear that right?

I called dispatch and the person who answered the phone said she wasn’t certain of the location.

I went back to listening to one of the office scanners.

Did I hear right? Was it at Quincy Elementary School, Pioneer campus? I would have to see. Grabbing the scanner I was out the door and traveling to the school?

Which way to go? Should I go over the hill or around on Quincy Junction to Lee Road. As I waited in the turn lane at the light I told myself it had been better to go the other way, but I didn’t change my course.

A few minutes later, I was glad I didn’t go in the other direction. There, with lights flashing, was a group of people gathering near the bridge across Mill Creek on Lee Road.

Animal Control officer Alec Saez was directing traffic and was immediately yelling for me to back up and leave. I’d just pulled into a turnout to get away from traffic. I’d also spotted a man with a rifle pointing down toward the water in Mill Creek. “I have a right to be here,” I yelled back. I do. I also knew that Saez was trying to protect me. As he later explained during a lull in activities, he didn’t want me to be in the line of fire. I wasn’t. I had my eye on the shooter, but at that point I wasn’t sure what he had in his sights.

Stepping up with my camera, I got one shot before Sgt. Kris Frasier made his. I noted that it sounded differently than what I usually recognized. Maybe he was trying to tranquilize it.

And then everyone’s yelling that it was hit. Surprising everyone the big mountain lion was on the move and it was going fast. I took photos as fast as I could, but got nothing. Not even its hindquarters as it moved into a wooded area near the stream.

Saez and another officer rushed over to see what the big cat had dropped. It was a dead raccoon, not the little dog someone had suspected. As I joined officers on the move to follow the animal, I glanced at the raccoon for myself. It was very clearly stiff — rigor mortis had set in — and the mountain lion was interrupted before it began its feast.

Soon it was clear that the officers were heading to the other side and to East Main Street/Highway 70. I drove slowly passed the line of cars waiting to pick up children at QES where preschool through second-grade students had been held inside their classrooms since the report of the mountain lion came in, I later learned from the schools.

Saez was near the front offices directing things, probably answering questions. I didn’t see other officers about, but they might have been around.

Turning right onto Highway 70 I spotted a dark-colored pickup near the new walkway across Mill Creek. Someone in one of the sheriff’s white pickups honked just before they turned down a private drive taking them further back to property along Mill Creek.

I knew I would follow on foot, but first checked out the situation from the new walking path. To my surprise, there was the Rev. George Tarleton on the downhill slope of the right side of the embankment, rifle in hand.

Tarleton is an interesting fellow. His career includes long stints in two branches of the military; he’s a retired minister; he’s a retired deputy and he’s now a chaplain for the sheriff’s department. I’d noted him in amongst the others gathered at the initial sighting place of the mountain lion. I shouldn’t have been surprised to see him now with his weapon at the ready.

Leaving that setting in Tarleton’s capable hands, I joined the other officers as they spread out looking for signs of the mountain lion. At this point they weren’t sure if it was injured or not.

And as they looked here and there around the different houses and buildings, checked tall pines and other places, Sheriff’s Office Evidence Clerk Holly Taylor and I chatter nervously while we faced the creek and waited.

I believe Taylor was somewhere slightly behind me to my left, when I heard a rustling along the steep embankment. Before I could do more than begin to raise my camera, the mountain lion was right there just a few yards in front of me. I was lucky enough to get the first shot just as it topped the embankment, and then more as it sought safety somewhere in the area.

As I took photos,  I could hear Taylor yelling, “He’s over here!”

It seemed like time slowed before we saw the first officers, weapons at the ready, come hurrying in.

“It’s under that trailer,” Taylor directed the first of the officers, or she said something of the sort.

The first fifth-wheel wasn’t covered and seemed well exposed. I watched as Sgt. Tom Froggatt (I think) checked it. I know it was Froggatt who touched my arm as we crossed behind a nearby house. He started to tell me to be careful or something like that and then broke off. Either he got distracted with something else or realized it was a waste of time.

Since I got over my fear of the dark as a child, I’m not easily spooked.

I watched and snapped photos as Froggatt and Deputy Justin Stanley continued to cautiously check around other travel trailers and covered objects in the immediate area. Other officers, I don’t remember who, walked ahead in their search.

And before I knew it there was a series of rapid-fire shots going off. Someone shouted “Watch for crossfire!” These sounded more like the gunshots I’m more familiar with.

Then officers were seen scurrying back along the embankment returning to areas they’d just left. I saw Stanley kneel down for a better look through the small trees and bushes.

I fully understand why people were concerned about a mountain lion, especially a very large one, near the school. My grandson goes to that school. He’s in kindergarten and wasn’t one of those detained in their classrooms until law enforcement released them. But as I joined sheriff’s officers in their pursuit of the cat I was secretly hoping he wouldn’t be hurt or killed and somehow get away to safety. Yes, I understand other parents concerns and desires for the mountain lion to be killed, or dispatched as those in law enforcement say. I probably understand their concerns far better than they understand mine.

I drove back to Mill Creek on Lee Road to where law enforcement gathered again. I pulled over in conflict with myself. Should I stay or should I go. I left. Even if I got the opportunity to see the kill we wouldn’t have run it in the newspapers.

When I got back to the office, I was met with the news that the cat was no more. The woman who gave me that information was clearly upset. She was familiar with it. It roamed her neighborhood — probably claimed a few of her cats over the years. It ruined her afternoon and probably her evening.

According to Sgt. Steve Peay, a woman named Jennie Mannle first alerted authorities about the mountain lion in some bushes.

It was a legal kill, said Capt. Patrick Foy with the Department of Fish and Wildlife in Sacramento.

The mountain lion had to be dispatched for public safety considerations.

Foy went on to say that two Fish and Wildlife people were en route to assist with the situation March 12, but just couldn’t get to the scene fast enough.