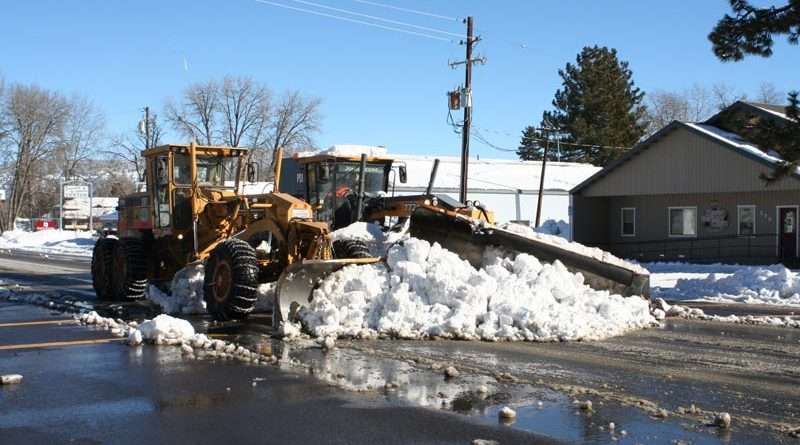 CHP Sergeant Brent Townsend said the problem of cars being left on the side of the roadway during snowstorms is an ongoing problem for snowplow operators in Westwood and to a lesser extent in Chester. Photo by Stacy Fisher
News
January 8, 2020January 15, 2020 Stacy Fisher, Staff Writer

After what was a rather mild December in terms of snow, we’re all reminded that the winter is just getting started, with what promises to be much more plentiful snowfall in January and February in both Plumas and Lassen counties.

Bob McGarva, Lassen County Public Works road field supervisor, said that, “It would be great if people remembered to move any vehicles parked in the street on days when snowplow drivers are scheduled,” to maintain an open path along the side of the roadway.

He said residents needed to stay alert during weather forecasts the day before a snowstorm is expected to arrive so they can prepare accordingly to keep the front of their homes cleared of any parked vehicles.

When a plow encounters a parked car along its route, “it’s forced to move around the vehicle, and eventually as the snow piles up higher and higher, it gets pushed out into the street and that could interfere with traffic,” McGarva said.

Another problem, he asserted, is the possibility of an unintentional accident should a plow blade meet a bumper for example.

“We try not to but on occasion we hit cars,” he admitted. “Obviously we don’t want that to happen,” because then the driver must stop, contact the owner and instigate an insurance claim.

Nevertheless, “sometimes with the snow and the ice, our equipment just slips into the vehicle.”

McGarva noted that there are only a handful of plows working at any given time removing snow and once they’ve finished their routes, residents can’t expect them to return to take care of plowing a particular address if a car is moved after a plow has already visited a location.

In the worst-case scenario, “We just won’t plow if we can’t do so safely.”

The CHP is working to stay more on top of the problem this year by making people more conscious of the issue.

CHP Sergeant Brent Townsend said the problem of cars being left on the side of the roadway during snowstorms is an ongoing problem in both Westwood and to a lesser extent in Chester.

A Chester resident himself, Townsend said, “When we know a vehicle is going to be in the way of the snowplows, we try to contact the owner by knocking on their door or leaving a note on the windshield and asking them to please remove their car so the plow guys can get through.”

In Westwood, he said, last year there were eight or nine vehicles — mostly parked long-term or non-operational — in the street that were involved in incidents where plow-related damage occurred “and a lot of times they didn’t know it until the snow melted” much later.

“Just be aware and considerate,” he asks residents in both Westwood and Chester, noting that, “The plow operators are understaffed, and if they have to go back to a street because someone didn’t move their car when they first came through, well they just don’t have the time for that.”

Also, once the snow around a car starts freezing and turns icy a plow operator can no longer clear it.

County ordinances allow the CHP to write a $50 ticket for vehicles that are in the way, not including towing (at owner’s expense) and possible storage costs.

“Generally speaking, we really try hard making an effort to contact the owner first,” said Townsend, to move their automobiles and trailers off the street, “because we really don’t like to tow cars.”

Once the snow is removed he said people are welcome to park back on the street.