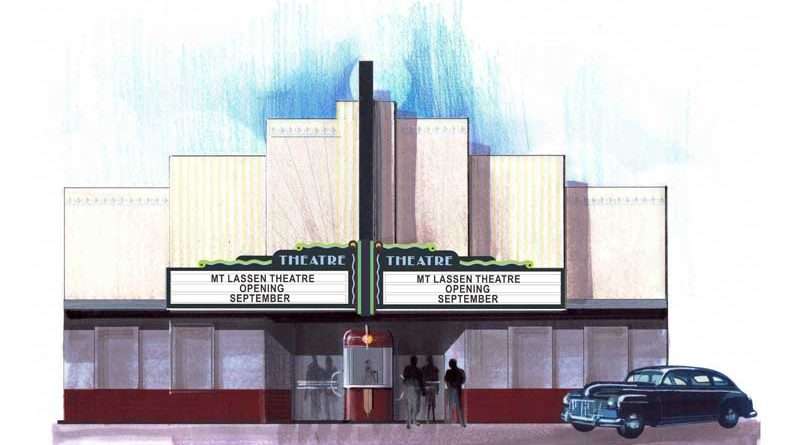 There are a lot of exciting renovations coming to the Mt. Lassen Theatre in Chester, said Gwen Meinhardt, the theater’s executive director. Renovations are planned in two phases.

For starters, the first phase includes a modern Dolby Atmos surround sound system that was just installed around Christmas. She said the sound system boasts full 360-degree in-depth sound, featuring 13 speakers situated throughout the theater and in the ceiling, for “sound you can feel.”

In addition, “We’re getting several hundred new theater seats to install this summer that were donated by Galaxy Luxury Sparks IMAX Theater in Reno,” said Meinhardt.

She said that, “An anonymous donor has come forward with funds to rent an airplane hangar in the town of Sparks to store the seats, and will also pay for the cost of delivery once the theater here in Chester is ready to install them.”

Meinhardt said that because she values the history of the original theater, “we will retain a small number of the older seats in the final version of the floor plan, but have them completely restored.”

Meinhardt is thrilled that Womack Construction is looking to rebuild the façade of the theater beginning the last week of January, so the front of the building will be strong enough to hold the weight of the new V-shaped marquee that will be shipped and installed in the near future.

Alpha Architecture of Sacramento manufactured the new blade and marquee, paid for through donations. The company is keeping the marquee parts stored at their location in Sacramento at no charge until the theater is ready to receive them.

The theater will remain open during show times during the construction period, “with the construction being provided as a gift to the community and the theater by Womack Construction,” and should be completed sometime in March, she estimated, depending on the weather.

The exterior of the theater will have double glass doors, new walkways, be ADA compliant and feature an extended art deco box office design, plus an outside Terrazzo composed of donor-engraved bricks to show their support.

Reducing the steep grade from the street to the front entrance to improve winter drainage is planned as well, along with raising the current lobby and concession area ceiling and re-leveling the interior floor area.

She said they continue to receive donations of split firewood, “which we use to heat the theater. … The duel-stage heater, once fully upgraded, will run on both wood and fuel.”

An anonymous donor, who saw that the concession workers were struggling to keep up with the demand for popcorn at the Friday night movies, donated a brand new, larger-size popcorn maker located in the main lobby area, Meinhardt said gleefully, which will mean shorter wait times for theater-goers.

Another exciting development, said Meinhardt, included the recent acquisition of a 60-foot by 10-foot trailer behind the theater, that Mt. Lassen Community Church, the sponsoring church, plans to refurbish in the coming months to use for visual and performing arts enrichment classes, as well as music and drama rehearsals, where performers can practice before appearing on the stage located inside the theater.

The money for the trailer came from the Mt. Lassen Community Church congregation during Christmas Eve services. The church will also use the trailer for Sunday school classes.

She said that Womack Construction again showed their generosity by hauling the trailer to the new location, and also brought fill-dirt to level the ground.

In the second phase, Meinhardt said she plans to reorient the interior and stage to face Chester Park, located right outside of the building, providing open access to the park with a retractable wall. She said significant funds would still have to be raised for such ambitious plans.

“We wanted to do this because no one has ever thought of combining the theater with Chester Park in a way that could serve the community in a wider context, for example utilizing the stage for a duel audience or for outdoor concerts, plays and also showing movies in the park using a movable screen.”

Meinhardt is hoping to start Phase 2 fundraising activities immediately after the grand opening with the new marquee starting in late spring.

As part of the second phase of the renovation, which won’t be complete until full funding is acquired, Meinhardt is placing a high priority on raising the ceiling in the theater itself to make room for a mezzanine or second level of seating to provide space for additional attendance.

Meinhardt wanted to mention the talented architect she employs for design work, Fernando Duarte of Sacramento, whose passion is working on old theaters all over the world.

“A big thanks to everyone who has made such generous donations, including the companies that have done so much work for us,” she said, adding that, “I also wanted to thank Steve Graffweg for loaning us a tractor, and to Merle Salvador for plowing the snow from the parking lot every winter, and a huge thank you for the overwhelming financial support and the encouragement we receive from Chester residents. It’s been a terrific experience for me.”

Of special interest, Mt. Lassen Theatre has an amazing new, updated website, she said, created by Jesse DuBord of DuBord Studios out of Reno: mtlassentheatre.org, and includes a menu on the website for donations. “A huge thank you to DuBord Studios for their generous donation of time and talent.”

For additional information, or to reserve the use of the interior stage for performances or concerts, contact Gwen at [email protected]