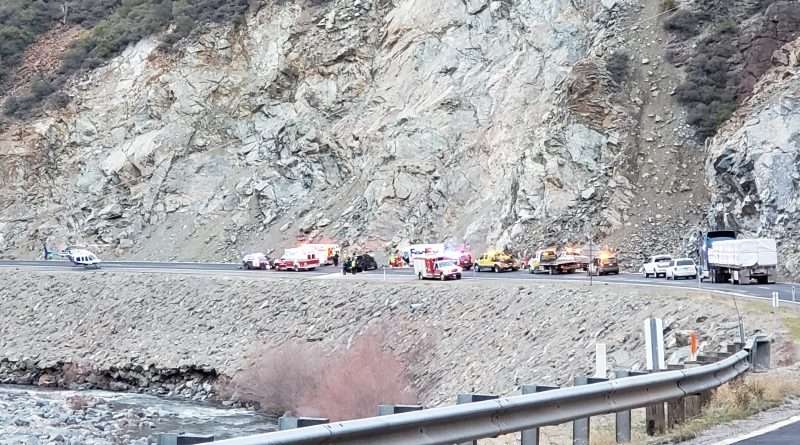 The scene of a Jan. 18 crash in the Feather River Canyon that sent a young man (driving the Fed EX truck seen in the photo) to the hospital with major injuries. According to the CHP, the other driver, a Quincy woman, is believed to have crossed over the centerline (she was driving the black truck in the center of the photo), causing the incident. She sustained minor injuries. Photo by Peter Livingston
News
January 19, 2021 Editor

A two-vehicle collision on Monday afternoon Jan. 18 in the Feather River Canyon resulted in one driver being air lifted to Enloe Medical Center in Chico with major injuries.

According to the CHP account of the incident, Quincy resident Tanya Blust, 43, was driving a 2007 black Ford F-150 truck eastbound on Highway 70 west of Rush Creek Road at a stated speed of 50 mph. Galen Wallace, 23, of Oroville, was driving a 2020 white Ford Transit 350 van (contracted by Fed Ex) westbound, west of Rush Creek at an unknown speed.

The two vehicles were approaching each other in a sharp curve (right-hand for Blust, left-hand for Wallace). The preliminary investigation indicates that Blust allowed her F-150 to drift over the centerline and enter the westbound lane just as the van was passing by. The left front of the F-150 struck the left front of the van in a head-on manner. The air bags of both vehicles deployed and both vehicles rotated counterclockwise. The F-150 came to west facing northwest straddling the centerline and blocking both lanes of Highway 70. The van came to rest facing west on the north shoulder of the highway.

Blust was able to climb out the driver’s door through the broken window. Wallace was rendered unconscious and had to be extricated from the van by the Quincy Volunteer Fire Department. Wallace was transported to Enloe Medical Center for his major injuries. Blust sustained minor injuries.