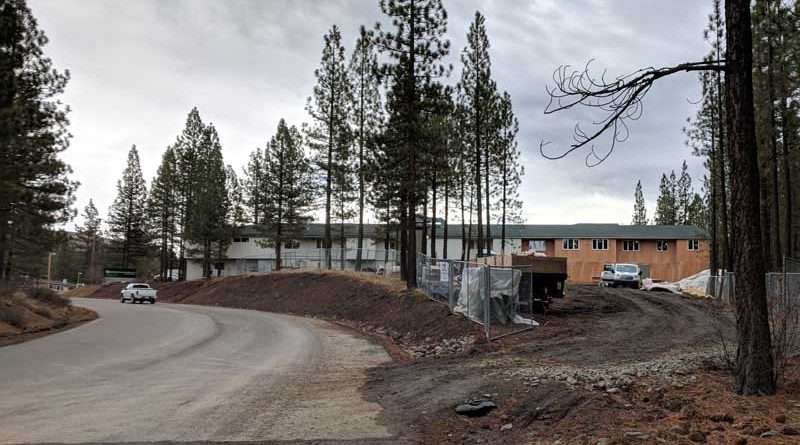 Eastern Plumas Health Care awarded a contract for the Portola Clinic expansion to McCuen Construction on June 22, 2017, and according to CEO Tom Hayes, the work is on track. “It’s going to be a nice addition,” Hayes smiled. “I’m anxious to see the remodel of the clinic as well.”

The addition will be home to EPHC’s new behavioral health program, funded by a PRIME grant totaling $750,000 per year for five years.

“We’re staying on schedule,” Hayes noted. “We’ve gotten lucky thus far with the mild winter weather and have been able to dodge the poor weather days.”

Hayes expects the clinic addition to be completed by April 1, at which time the remodeling efforts will shift to the current Portola campus clinic. “We will be remodeling the entire clinic,” Hayes said. “There will ultimately be a new common entrance that will lead to medical and behavioral health.” The dental clinic will also have a separate entrance.

The clinic will be open and functioning throughout the remodel and Hayes looks forward to a full “facelift” for the facility.

“McCuen Construction has been excellent to work with,” Hayes stated. “They are staying on target. There are always some challenges, but thus far we haven’t experienced anything major as the construction proceeds.”

Hayes also noted the ongoing efforts of Stan Peiler and Pat Martinez in EPHC’s Engineering Department and other EPHC staff as they continue to work toward a completed project.

“Behavioral Health is a new and very much needed service for Portola,” Hayes said in speaking about the clinic addition. Behavioral health services are currently being offered at the EPHC Portola campus inside a modular unit, with some telemedicine still being put to use as EPHC continues to garner the interest of new staff to fill behavioral health positions.

“EPHC is working to care for mild to moderate behavioral health issues in collaboration with their primary care providers — there is a lot of collaboration going on,” Hayes explained.

EPHC is currently in the process of working toward a better system of collaboration with County Behavioral Health, as EPHC strives to take on more of the mild to moderate behavioral caseload.

“We are trying to refer the severe behavioral health patients to the County, so that those individuals can receive specialized care, but the process has been challenging,” Hayes noted. “We are working through the challenges of reassigning case loads.”

Hayes went on, “Our responsibility as a community is to come up with programs like this to provide much needed care for those in need.”

Talks continue as EPHC and the county work toward a balance to ensure quality care for all, and Hayes continues to focus on the forward momentum that is building with the continued work on the clinic addition.