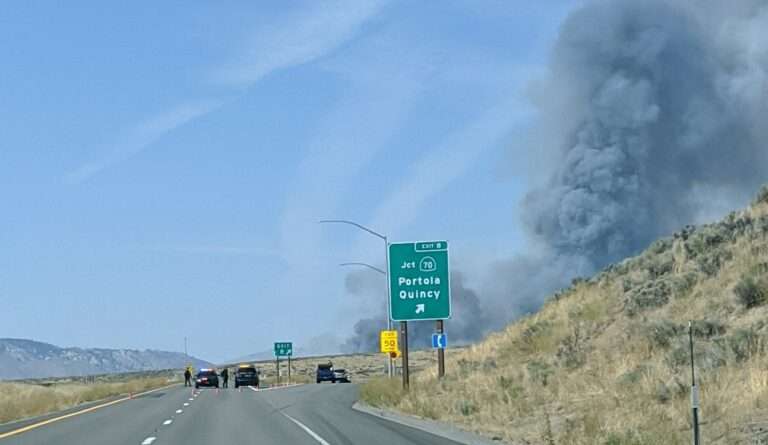 Smoke can be seen from the fire off of Highway 395 north of Hallelujah Junction. Photo by Lauren Westmoreland
News
August 2, 2020August 5, 2020 Editor
Update: 8:30 a.m., Monday, Aug. 3: Truckee Meadows Fire & Rescue is in unified command with the Bureau of Land Management fighting the North Fire, near Hallelujah Junction.  It is now at 3,000 acres, with 0 percent  containment. Evacuations remain in effect. Reminder that drones over active incident are prohibited.
Two smaller fires — the South Fire and Shoe Tree — were held at 5 acres and less than an acre respectively.
Update: 4:24 p.m. A large fire of unknown origin, north of Hallelujah Junction, has shut down U.S. 395 to traffic in both directions as of 4:23 p.m. on Sunday, Aug. 2.
The incident was reported at 2:49 p.m.
Southbound traffic is currently stopped at the north Red Rock Road junction at U.S. 395 and northbound traffic is closed at Hallelujah Junction.
A new fire has broken out this afternoon north of Highway 395. Traffic is being diverted at Hallelujah Junction. More information will be posted as it becomes available. According to KTVN News, there are actually three fires burning in the area: the North Fire at 300 acres; the South Fire at 5 acres and the Shoe Tree has burned less than 1 acre.