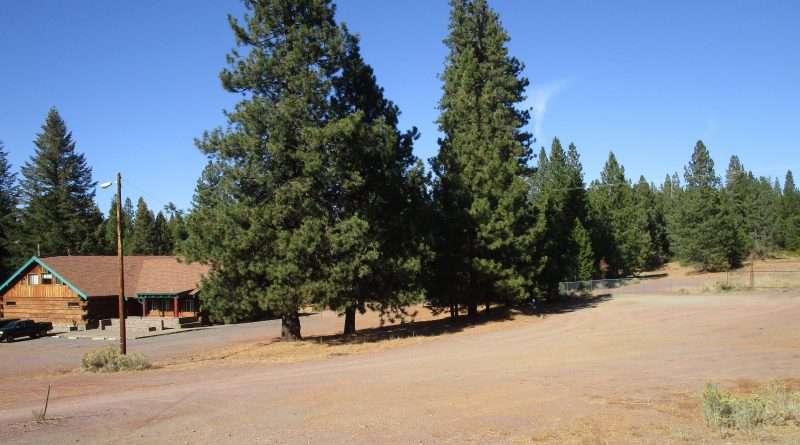 This is what the former ‘Crossroads’ restaurant and adjacent land looks like today. It doesn’t take a lot of imagination to envision a newly refreshed log building with a loop road going into the right-side property with numerous upscale camping sites. Photo by Gregg Scott
News
October 15, 2021October 21, 2021 Editor

Several years ago, the were rumors around the Almanor Basin that there was an RV Park being proposed at the corner of County Road A13 and Hwy. 147 in Hamilton Branch. As usual with rumors, the only part that was factual was that a permit was requested to develop the aforementioned property which includes the building that is known to many as the old Crossroads Restaurant.

On Wednesday, Oct. 13, the Plumas County Zoning Administration held a meeting in the conference room at 555 Main St. in Quincy that included a review of the proposed project and possible approval of a special use permit and campground permit for: Riverpark RV Park, LLC. So that confusion will not again run rampant, please read the following very closely.

The vision of the folks that want to develop this location is to have an upscale ‘Glamping Site” to include 56 pre-built locations that would feature a combination of Yurts, Covered Wagons and Outfitter type tents for sleeping. This would also include remodeling and opening the restaurant along with shower houses and a swimming pool. There would not be spaces to park RVs.

After approximately an hour and a half of questions, answers and discussion by all participants, including public input by a current Riverbend resident, Planning Director Tracy Ferguson approved the proposed project as amended in the hearing. This does not mean that however, that construction will begin anytime soon.

Riverfront RV Park LLC needed these permits to proceed to the State of California to attain further permits. The state has jurisdiction over all campgrounds and RV parks in California. It does mean that with some luck and perseverance, the Almanor Basin may have another high-end facility and restaurant to entice seasonal business to the area.