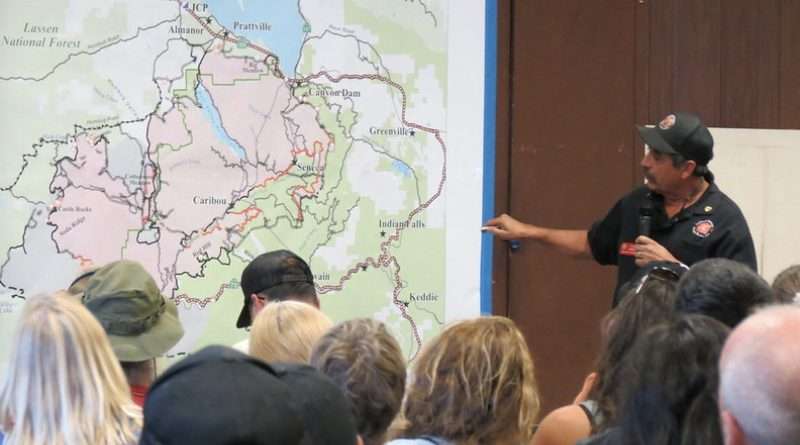 Rocky Opliger, standing, points to a map during the 2012 Chips Fire. He is the new incident commander for the East Zone. Photo courtesy of the USFS
News
August 3, 2021August 5, 2021 Editor

The California Interagency Incident Management Team 2 (CIIMT2) that has been responsible for the East Zone of the Dixie Fire will be transitioning command today with CIIMT4 under the command of Rocky Opliger.

Incident Commander Rocky Opliger is no stranger to Plumas County. He and his team (including Jake Cagle) were most recently assigned to the Beckwourth Complex last month, and in 2019 Opliger served on the Walker Fire. He also had a role in the 2012 Chips Fire. Cagle became very well known to Plumas County residents during last year’s North Complex Fire, where as the operations section chief he gave daily briefings.

Team members can vary depending on personal and professional circumstances, but Plumas News confirmed that Cagle is with the team, but whether he will be giving the daily briefings hasn’t been shared. It’s expected that the new teams will be introduced during the community meeting tonight at 7 p.m. which is available to view on Facebook or via Zoom.

In researching Rocky Opliger’s tenure in Plumas County, Plumas News came across this article from September 2019, which is interesting not only because of Opliger’s connection to the Walker Fire and the county, but also for how different the fire season was just two years ago. Since this fire may have faded from our collective memories, here is a reminder.

The Walker Fire has been the biggest fire in the state this season and the number one priority in the nation, but Monday’s rain might have doused that notoriety.

The fire, which broke out Sept. 4, was 96 percent contained when this newspaper went to press, and over 54,000 acres.

Sunday’s red flag warning saw more than 2,000 people assigned to the fire, the most since the fire broke out. Firefighters hoped to avoid a major run as occurred back on Sept. 6 when adverse wind conditions pushed the fire to explode by 21,000 acres.

At the Sunday, Sept. 15, 6 a.m. briefing held at Fire Camp in Taylorsville, each of the speakers presenting their updates stressed that firefighters had done a great job of preparing for the winds and hoped to keep the fire within containment lines, but the top priority should be their safety.

“Be vigilant,” was a familiar refrain.

“Our first objective is your safety,” said Dave Soldavini, the night operations branch director, after warning of the anticipated wind event.

Rocky Opliger, deputy incident commander, who wrapped up the briefing told the firefighters gathered that they had done incredible jobs to contain the fire and prepare for the wind. He again encouraged vigilance and concluded with: “It’s show time.”

Sunday’s winds caused two spot fires south of the perimeter, but they were quickly surrounded and contained. A separate fire, called the Stony Fire, broke out about 3 miles north of the fire and also was quickly contained. It was not a spot fire and is under investigation.

The exact cause of the Walker Fire also is still under investigation, though it has been determined to be human caused, not lightning.

Over the course of the fire, several areas were at times under advisory and mandatory evacuations both in Plumas and Lassen counties including: Murdock Crossing, Stony Ridge Antelope Lake, Frank’s Valley, Flournoy Bridge and Milford areas. All evacuation orders were lifted Monday morning, Sept. 16.

The Forest Service reports that seven structures have been destroyed.

In addition to the main camp in Taylorsville, a secondary camp was established at Four Corners near Beckwourth in the eastern end of Pumas County to allow quicker access to the east side of the fire.

In addition to Forest Service resources, local fire districts joined other districts from throughout the state in providing structure protection. They were particularly visible at the fire’s onset, protecting buildings in the Genesee Valley. Those included Beckwourth, Chester, Eastern Plumas, Indian Valley, Meadow Valley and Quincy.

The Plumas County Sheriff’s Office and Office of Emergency Services worked closely with the Forest Service and provided evacuation assistance.