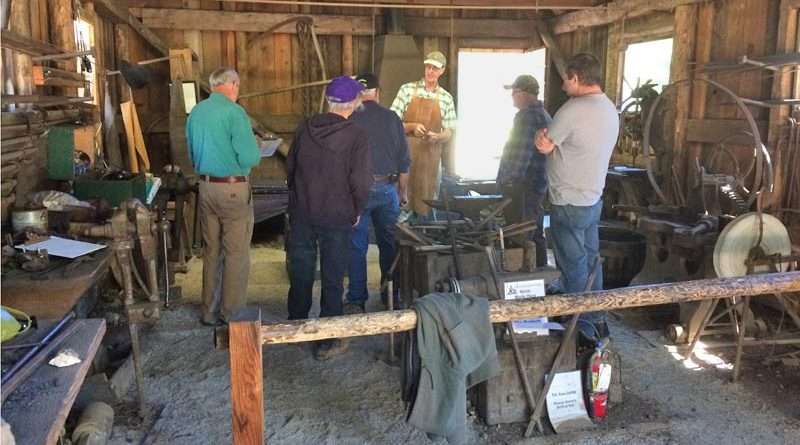 Dennis Black, center, teaches the art of blacksmithing to new volunteers for the living history demonstrations held at Plumas-Eureka State Park at the start of the 2017 season. PESPA invites all to join this group to keep the bellows moving seven days a week this summer. Photo submitted by Tim Hardie
News
May 1, 2018April 27, 2018 Lauren Westmoreland, Staff Writer

PESPA reaches out each year to interested local volunteers and docents as an integral part of the many interpretive and educational programs at the park made available for the large number of park visitors that visit every summer.

PESPA assists the staff of this historic area by leading tours to various venues located within the state park such as the Assay Office, functional black smith shop, miners cabin and the ever-popular Moriarty House, which was built circa 1893-1910. Volunteers also contribute in operating the store in the original 1875 park headquarters museum.

To accomplish all of these tasks, PESPA is sending an invitation to the local community. According to Tim Hardie of PESPA, “We need interested folks to add to the dedicated core of 70 docents and volunteers that have hosted this “Hidden Gem of the Lost Sierra” to approximately 50,000-plus visitors each season.”

To operate the existing programs, the association is asking for 15 to 20 new interns and ambassadors to visit with Ranger Tim Quandt  on April 28 at 10 a.m. in the museum basement.

PESPA invites all interested volunteers to peek into the history of Eastern Plumas County and increase their knowledge of the rich history of the area by volunteering at the park this summer. “PESPA needs your gift of time this year,” Hardie said.

According to Hardie, Plumas Eureka State Park is one of the great family camping and day use destinations in the state.

“This 5,000-acre park needs hikers, woodworkers, blacksmiths, teachers, naturalists, bird watchers, gardeners, trail minders, weavers, musicians and just plain workers,” Hardie explained in his call to arms. “Help provide memorable experiences to folks of all ages by joining like minded individuals in an effort to expand visitor knowledge, by hiking the many miles of trails and learning how to provide ‘Living History Testaments’ about this beautiful spot,” Hardie said.

Requirements to become a volunteer are a current driver’s license and a curiosity about this park.

PESPA and the Department of Parks and Recreation will train volunteers and keep them busy while at the park.

Specific volunteer positions include cashiering at the museum store with the fun of talking to campers, the upcoming May cleanup day which involves raking as much as you can stand, staffing Gold Discovery Days, helping to distribute posters for events to local businesses, simple computer related work and more.

Hardie asks that volunteers that plan on attending the orientation RSVP for lunch if interested. Lunch will be held at noon and will be provided by PESPA board members.