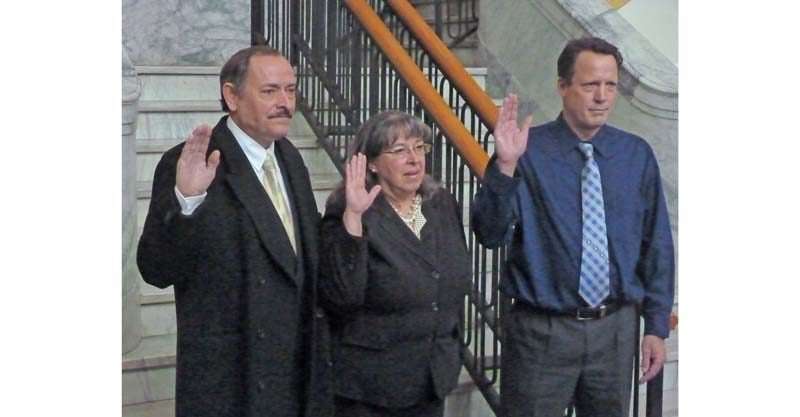 Michael Sanchez was sworn in as a new Plumas County supervisor Jan. 3. He succeeds Terry Swofford and represents District 1.

The ceremony took place in the courthouse rotunda prior to the board of supervisors’ meeting. Betty Parker, Sanchez’ mother, and his wife, Charlene Sanchez, were present to see him sworn in and participate in his first board meeting.

Lori Simpson was voted in as chairman of the board and Jeff Engel was elected as vice chairman.

The board convened as the Flood Control and Water Conservation District to try to speed up the process of transferring the Lake Davis water treatment plant to the city of Portola.

Supervisor Sherrie Thrall talked with Public Works Director Bob Perreault about why the process of turning over the treatment plant to Portola has taken six years.

Perreault explained the reasons for the delay and promised to meet with the city next week and to update the board once a month on progress made toward the complete turnover of the treatment plant to Portola.

Portola used water from Lake Davis as drinking water from 1970 until 1997, at which time the California Department of Fish and Wildlife first dumped thousands of gallons of the poison rotenone into the reservoir to rid it of introduced northern pike. CDFW feared the pike would get out of the lake during high flows, move downstream into the Sacramento Valley and delta and decimate native fish populations.

The first poisoning of the pike didn’t take so CDFW applied rotenone a second time in 2007.

In the meantime, Portola had been getting its drinking water from wells that didn’t meet federal arsenic standards.

From 2008 to 2009, as part of the settlement agreement involving the poisoning of Lake Davis, the U.S. Army Corps of Engineers rebuilt the Lake Davis water treatment plant at a cost of $6.3 million.

Since then, the county has been trying to get Portola to take over full responsibility and liability for the treatment plant.

Due to last minute changes by the Army Corps of Engineers that were not approved by the county and cost the county additional money, and a general shortage of county funds in recent years, fencing and paving outside the plant have not been completed. There are also procedural matters to address.

Problems have come up, however, with large capital purchases that take months to order and be delivered. The question asked was at what point should the board authorize the purchase.

Public Works recently purchased two snowplows for a total cost of $547,520. It takes 11 months for snowplows to be ordered and delivered.

The money for the snowplows had been appropriated in the budget, meaning that money could be spent to purchase new snowplows. However, the board had not officially authorized payment for the snowplows before the order was made.

If, as in this case, Public Works waits until the snowplows are delivered to go before the board for approval of payment, the board will have little choice but to vote for payment of the snowplows. In addition, it might be many weeks before the dealer will be paid for the snowplows.

County Counsel Craig Settlemire found a way for this type of delayed capital purchase to be made in compliance with county code that would also expedite payment to the dealer.

In the future, before ordering, the department head will come before the board and let the supervisors know the specifications of the recommended purchase and its estimated costs.

The board can then preapprove the purchase before it is ordered and the seller can be paid upon delivery and the county’s satisfaction with the item purchased.