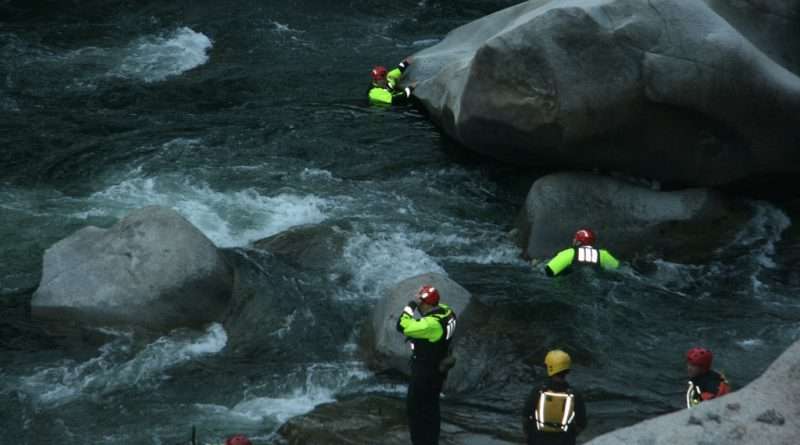 Plumas County Search and Rescue and CalFire divers work to retrieve the body of a 9-year-old Chico boy who drowned near the Tobin Bridge on July 24. Photo by Will Farris
News
July 25, 2019 Editor

A 9-year-old boy from Chico drowned near the Tobin Bridge last evening, making him the second victim in a week. (Heather Noone, 48, of Palo Alto, slipped into Rock Creek from a trail on July 17 and also drowned.)

Several agencies converged in the Feather River Canyon at approximately 8:30 p.m. on Wednesday, July 24, after the report of a possible drowning near the Tobin Bridge.

Plumas County Sheriff’s deputies, Plumas County Search and Rescue, the CHP, Forest Service, the CalFire dive team, PG&E, Plumas District Hospital and Quincy Fire responded to the scene where they learned the victim had been swimming with his adult brother and some friends. The 9-year-old had been swept underwater and lodged beneath a large rock.

The victim was recovered just after 9 p.m. with the efforts of Plumas County Search and Rescue and CalFire. The victim had been submerged for over two hours and was pronounced dead at the scene.

Due to the victim’s age, his identity will not be released.