On January 13, 2022, a beloved husband, father, grandfather, brother and friend, Norman Adamson, passed away after a lengthy illness. 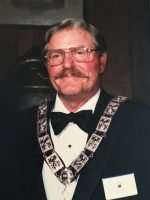 Norm was born January 8, 1934, in Parsons, Kansas, to John and Clara Adamson. He was the oldest of three siblings. His family moved to Downey, California, where Norm was raised and graduated from Downey High School in 1952. In high school he enjoyed playing sports, especially water polo.

Norm enlisted in the Army and served from 1952 to 1956. He was stationed in Germany where he developed a fondness for the local food and learned to speak the primary language. Norm received an Honorable Discharge. He was a registered Veteran and a member of the American Legion.

After serving in the Army, Norm returned to Southern California where he married his first wife. In 1961, he and his family moved to Chico. They resided there until Norm received a PG&E job promotion and transfer to Quincy. Norm attended community college and obtained a Contractor’s License. He built a house in Meadow Valley, which the family moved into in 1974. Norm continued to work for PG&E as a warehouse foreman until his retirement after 30 years.

In 1986, Norm married his second wife, Judy, and resided in East Quincy. Norm loved living in the Quincy area. If anyone asked him about Quincy, he told them it is a wonderful place to live and has everything you could want in a hometown. He enjoyed camping, fishing, duck hunting, boating, barbecuing, making homemade chocolate ice cream and socializing with family and friends.

Norm was an active member of the Elks for over 30 years. He served as Exalted Ruler three times, as well as other important positions within the organization. He and Judy enjoyed regularly volunteering for the Elks events and fundraisers.

Playing golf was one of Norm’s favorite things to do. When he was a teenager, he would ride his bike to the local golf course and caddy for the golfers. He and Judy were members of the Mt. Huff Golf Course and played there regularly, in addition to other courses in the area. Over the years, they also enjoyed bowling, dinner clubs, playing cards and traveling to visit family in Southern California, Arizona, Kansas, Arkansas and Colorado.

Norm will be greatly missed by his wife of 35 years, Judy; his children, Kerry (Don), Vicki, Scott (Stacy), and Stacy (James); his stepchildren, Cheryle and Jeff; and his six grandchildren and three great-grandchildren. He will also be greatly missed by his brother, Jamie (Joan) and his sister, Janis (Hank), and many nephews, nieces, cousins, friends, neighbors and the Quincy Community.

A Celebration of Life for Norm will be held at a later date. May he remain forever in our hearts.