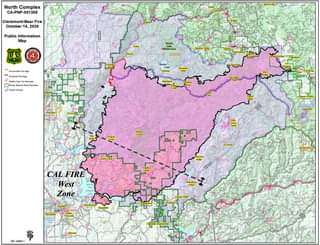 Although no one wants to see a fire drag on for two months as the North Complex has, there is a silver lining — with a Red Flag Warning in place, firefighters are here and on alert. Systems Operations Chief Jake Cagle mentioned that in his briefing last evening — they will be poised to respond if necessary.

Cagle also noted that due to the winds, there will be another briefing tonight. Incident Command had just announced the intention to go to every-other-day briefings, but tonight will be an exception due to the fire danger.

Residents in Bucks Lake, La Porte, the Feather River Canyon and parts of Quincy are on the list to have power shut off today, Oct. 14, with it not being scheduled to come back on until late Friday.

Firefighters have been making good progress on containment and the fire remains at 318,930 acres and 94 percent contained. Cagle said the containment number should increase soon, but all eyes are on the winds. While this weather pattern is expected to pack less strength than the one experienced in early September, crews are developing contingencies to ensure containment grows.

Crews continue to mop up and monitor the penstocks at Bucks Creek Powerhouse and the fire line along Highway 70, including McGee Ridge area. Suppression repair remains a key focus.

Forest closures remain in effect and hazardous conditions still exist. The public is asked to stay out of forest closure areas, as interference with fire suppression could delay or impede firefighting efforts. Law enforcement will be patrolling the area.

Residents in the La Porte and Bucks Lake areas are asked to use caution as fire personnel are still working in the area. Drive carefully and watch for fire equipment.

Operational briefings will be posted to the Plumas National Forest Facebook Page, www.facebook.com/USFSPlumas Team Planning meetings (daily at 6 p.m.) and will be available to watch via Zoom (https://usfs.zoomgov.com/j/1602646317).