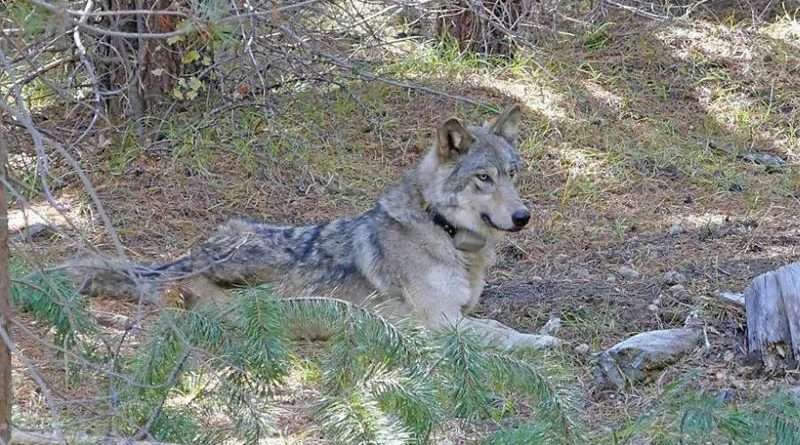 The California Department of Fish and Wildlife reports OR54, a wolf that has traveled extensively through Plumas, Lassen, Butte, Tehama and other counties, was found dead in Shasta County, which has led to a state investigation as to the cause of her death. Photo courtesy U.S. Fish and Wildlife Service

Many of you may remember back a couple of years ago when a wolf believed to be OR7 from the Oregon Imnaha Pack was filmed crossing the meadow north of the Chester/Lake Almanor causeway.

The California Department of Fish and Wildlife has reported that on Feb. 5, an offspring of this wolf, OR54, was found dead in Shasta County, which has lead to a state investigation as to the cause of her death.

Both OR7 and OR54 were monitored wolfs with radio collars and their travels were recorded by wildlife departments. OR7 was collared in 2011 and tracked until 2014 at which time only his VHS transmitter was working and can be found only by manual antenna search.

OR54, however, was being monitored via satellite and her vast wanderings led to her being called “a traveling maniac.”

Her radio collar indicated that she had covered an estimated 7,646 miles. That would be farther than going across the continental United States and back.

OR54 was the fourth pup from Oregon’s “Rogue Pack” that spent some time in Northern California.

Once she left the pack she traveled widely through Butte, Lassen, Modoc, Nevada, Plumas, Shasta, Sierra, Siskiyou and Tehama counties.

At one point, she even traveled near Truckee and Boreal Mountain ski area in Tahoe National Forest.

State officials did not say whether she was killed or died naturally, but because it is the second wolf death in California, following the shooting of a young male wolf in rural Modoc County in December 2018 they are investigating the incident.