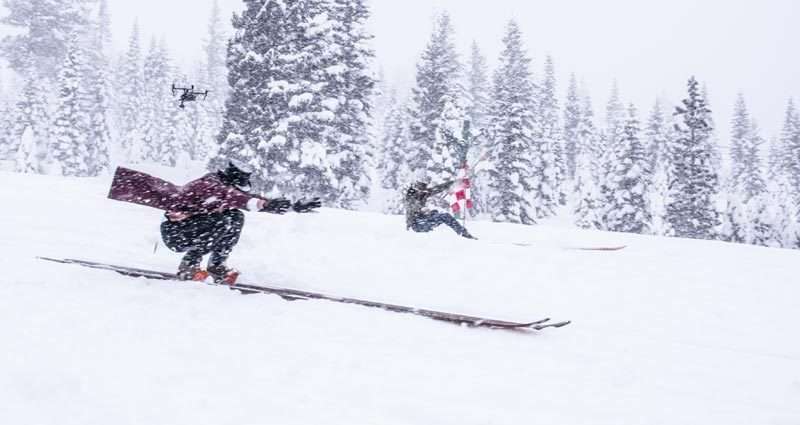 The second of the three Historic Longboard Revival Series competitions in 2019 attracted the attention of celebrity skier Jonny Moseley.

Moseley started out in 1992 on the Squaw Valley Freestyle Ski Team where he soon won his first junior national title in freestyle skiing.

He was selected for the U.S. Ski Team in 1993, the same year he graduated high school. In 1998, Moseley won two World Cup events and participated in the 1998 Winter Olympics in Japan where he won a gold medal. That same year he won the 1998 World Cup Mogul Skiing title and the U.S. national title.

Moseley is largely credited with bringing the “Iron Cross” trick into competitive freestyle skiing, but he didn’t perform any of those moves with a heavy pair of longboards strapped to his boots.

“He spoke to lots of people and is a pretty impressive person in my opinion,” said local celebrity and photographer Lisa Kelly. Moseley joined some of the regulars in competition at the top of the hill at Johnsville Historic Ski Bowl for race two of three Feb. 17.

“This is not Jonny’s first exposure to longboards,” said Kelly. Apparently, Moseley was photographed 10 years ago toting a pair of Plumas Ski Club longboards.

The Olympian became acquainted with the Plumas Ski Club at Squaw Valley where the club had been invited to show off longboards as part of a celebration of the anniversary of Squaw Valley hosting the Olympics in 1960. The demonstration of historic longboard racing is what eventually led Moseley to show up at Johnsville to race this year.

“Jonny Moseley is really a nice guy!” said Kelly, “Not only did he race and race and race — at least four heats — but he helped shovel the deck all morning, participated in the draw, dressed in period garb, didn’t ‘spit or cheat’ as per ‘offishal race rules.’”

And there was plenty of snow to shovel! The morning brought piles and piles of fresh snow to the hill, which is evidenced in all the pre-race group pictures.

“But the snow stopped and the sun came out,” said race spectator Diane Irving. “It turned out to be a beautiful day.”

Judging from past years, there is enough snow on the hill to guarantee that the World Championship third race will be a “go” for Sunday, March 17. The first-place winners in round two are Gina “Death Wish” Luciano and Craig Kusener.

The competition was stiff given Olympic gold medalist Moseley was in the field.

“Although Jonny did not podium today he showed us all that he’s got what it takes to be a son of ‘The Lost Sierra’ and a competitor for the Championship Belt in the future,” said Ski Club board president and longboard racer Donald Frugulia. I wonder if Moseley will return to compete for the World Championship title March 17?