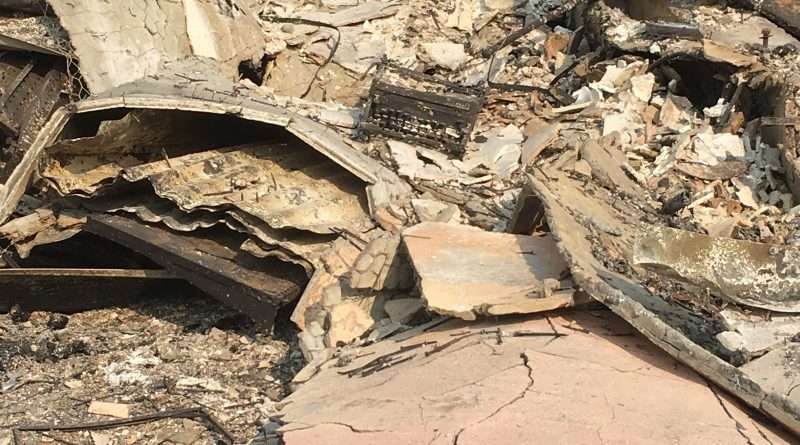 When you get in to see your property. The emotion is overwhelming— as is the thought of rebuilding. Photo by Meg Upton
News
August 19, 2021August 23, 2021 Editor

We walked the neighborhood twice after I read online of a neighbor’s not-so-smoldering fire that had some potential left in it.

The tiny house is too smoky to sleep in, so we’re at my mom’s on the other side of the driveway. I left a window open at the tiny house on July 14 and it’s unbearable in there. Everything will have to be washed and dried when one can do such things again. So I’m in my old room instead.

Only I can’t sleep. From my mother’s deck we can watch the Dixie creep towards Genesee and Taylorsville and it’s too hard to sleep knowing all that is out there.

We have buckets out for any embers that fall. We will take turns sleeping and staring at the walls.

The husband and I took a walk earlier. Passed a mountain lion sitting on the lawn of a house that’s been unoccupied for awhile. The three street neighborhood is littered with cow patties left behind by the cows that were roaming the neighborhood when we were all gone.  Last time I came down to the valley I saw some police and Lorraine Nielsen trying to round up her llama that must have gotten out too. It was quite a sight, the llama clearly okay with its freedom.

The pasture on the valley two streets down from us provides a fall sense of security that we will not burn—much of it is green still, but above it is that menacing orange sky that ruins sleep.

I am trying to remember my week in Quincy, to write down all the details before I forget. Like going out to dinner with a friend to forget about things for a while and then everyone’s phone goes off at once. Evacuation alert. Who are the next people to be evacuated? Who is next in this roulette of fire and wind?

I saw the faces of so many Greenville people walking down unfamiliar streets the way people do when they feel they don’t belong somewhere. People: out of context, out of place, looking lost.

The air was too thick in Quincy today and Indian Valley—at least as far as Mount Hough Estates—was looking clearer.

We are out of the national news cycle; we have hung on too long usurped by the Caldor Fire, Delta Variant, Afghanistan, the earthquake in Haiti, a recall election. Britney Spears.

We can only be relevant for so long. We’ve always had the suspicion that we’d have to fend for ourselves.

My neighbors seem to be forming a citizen’s watch for embers not thieves.

There is some good news. The wind is dying down right now.

John Hunter of Hunter’s Hardware has the American flag flying on Main street in Greenville. I believe it’s where the American Legion Post used to be. Flying it at night too, and lit correctly too as this army brat likes to see.

My son’s girlfriend’s cat was found with burned paws and burned fur but somehow survived. She’s in the care of a vet now and headed to a cat burn unit in Davis. The photos online that Indian Valley folk are posting of their lost independent felines is gut wrenching.

There is the feeling in your chest that you knew all along. You find out who people really are in a crisis of these proportions. You find out who will help exploit your town and who will give you the shirt of their back and not even want a public thank you.  You find out who is there for their children and their community. Who bails because they cannot handle adversity.

I want to be useful to my community. I want to build back. I understand why people stay until the last possible minute.

This morning I woke up in my mother’s house and put on the kettle for coffee and picked up the bag where we keep unprocessed nuts and went out onto the ash covered deck and threw nuts out for the blue jays. One swooped down and then another. We put water buckets out for thirsty critters.

This morning my husband and I went to see our property to take photos of the losses without touching anything. We found that the underground smoldering fire from a few days ago had grown. He put out the fire. I fed a buck the apple that was in my car. We left water in a bucket for him and whatever else may need it. The fire we put out was in the only section of green we had left.

We went to town to see my office. It’s easy to know where it was—next to the sheriff substation. I didn’t go anywhere else in town. It was too much for me. It’s hard to get your bearings when nothing is recognizable. I could make out the brick of the Masonic Lodge and Ken Donnell’s jail behind the substation and that was about it for my section of downtown.

We pulled in and I jumped down from the truck with a heavy duty particle mask and saw one of my typewriters on top of all the rubble. A Royal from the 1940s. I also found a mangled doll prop from the closet where I kept all our props and costumes since the dramaworks warehouse burned down. Is burning our legacy? Or can something else be it instead?

I want to treasure every last green tree and plant I see on the drive between Greenville and Quincy. I want to remember that with some precipitation this winter, spring could be a glorious renewal.

John Hunter placed the American flag in Greenville this week where the American Legion Post once stood. Photo submitted.