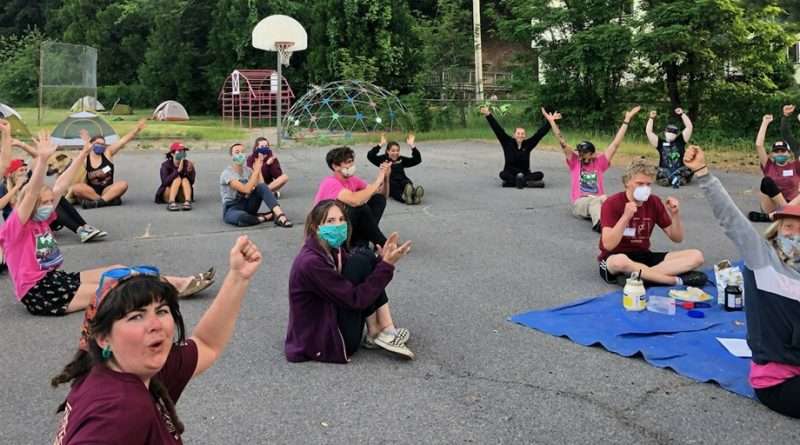 P-CREW members are jubilant when they learn that the results of their COVID tests are negative last June and they have been cleared to begin their work. File photo
News
June 24, 2020June 25, 2020 Editor

Two teams of local and Bay Area teens are in the woods for the next five weeks practicing their own form of social distancing. It wasn’t easy, but the Sierra Institute found a way to continue with its sixth year of P-CREW (Plumas, Conservation, Restoration Education in Watershed).

“I had been agonizing over this whole project for a couple of months,” said Jonanthan Kusel, the Institute’s executive director, of continuing the program in the midst of a pandemic. “What would we have to do ensure their safety?” How do you bring together several youth and four counselors from diverse areas and send them out to work together for weeks?

Self isolation at home and then two rounds of COVID testing — three to five days before leaving home and then again immediately after arrival. The testing was a challenge, but Kusel credited Plumas District Hospital for its efforts. The hospital had procured an onsite testing system, but was awaiting the reagents to actually begin the process. Once the supplies were available, the youth were quickly tested and the hospital’s lab processed the results.

The first two groups arrived last week for their orientation and testing and then headed out to their work assignments Monday.

“It’s actually the perfect form of social distancing,” Kusel said. “They are away from everyone.”

They are self-contained — sleeping in tents and preparing their own food — which is replenished by staff on a regular basis. The Institute purchased more tents to ensure even more social distancing. The groups avoid public campgrounds and establish their own camping areas.

Kusel said that the youth represent a diverse group of individuals. “We try to mix rural, urban, race and gender,” Kusel said. They are all paid for their work.

According to Ashley Bomar, P-CREW program coordinator, this summer the teams will be working on a fuel reduction project in Butterfly Valley near Quincy; working with the Plumas National Forest on invasive species removal in Indian Valley, and assisting with trail projects in Lassen Volacanic National Park.

Sierra Institute partners with the Plumas and Lassen national forests, as well as the Park Service on projects.

The entire process will be repeated later this summer when it’s time for the second two groups to arrive.