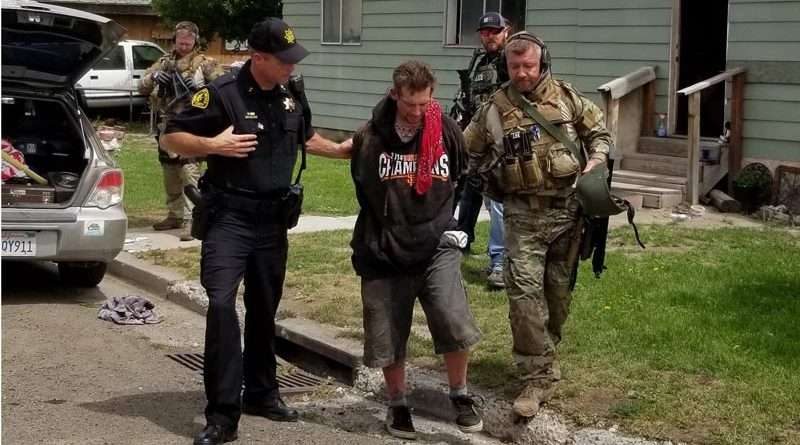 Plumas and Sierra counties sheriff’s officers joined forces with other law enforcement agencies in apprehending a parolee in Loyalton, Tuesday, Aug. 6, at 4 p.m.

Aaron Walter, 41, was arrested after a SWAT team and other law enforcement officers converged at a location in Loyalton where they believed he had barricaded himself.

It was 10:28 a.m. on Aug. 6 when members of SWAT were called to respond to the Loyalton address. “Walter, who is on parole for a previous charge of homicide was wanted in Plumas County for a domestic violence incident that occurred July 28,” according Plumas County Sheriff’s Patrol Commander Todd Johns. The incident took place in Meadow Valley.

Walter was also wanted by the California Department of Corrections as a parolee at large.

Members of California Department of Corrections and Rehabilitation Fugitive Apprehension Team initially contacted Walter in Loyalton. He then managed to barricade himself inside a residence.

When SWAT and other officers arrived, they surrounded the house, while the CHP handled traffic control. It was reported that Walter had hidden himself in the attic.

At some point, he indicated to law enforcement that he wanted to surrender. “Shortly after their arrival Walter was taken into custody without further incident,” Johns said.

Walter was transported to the Plumas County jail.

According to Johns, while sheriff’s officers were investigating the initial domestic violence incident they discovered that Walter was attempting to purchase firearms. He was believed to be arranging a Suicide by Cop, Johns said.

Walter indicated that he did not want to go back to prison.

“I contacted the Fugitive Apprehension unit from California Department of Corrections and Rehabilitation (CDC) and gave them all of our information,” Johns explained.

Plumas officers also received information that Walter might have fled to a friend’s house in Loyalton. “Our investigations unit did surveillance in Loyalton for two days and were unable to locate him.”

It was on the third day that a Sierra County probation officer happened to spot Walter in Loyalton. The information was passed on to Sierra County Sheriff Mike Fisher. Law enforcement personnel from both counties were coordinating efforts.

“Once spotted we were confident he was at his friend’s house and alerted the Apprehension Team from CDC,” Johns explained.

That team responded and ultimately confronted Walter on the morning of Aug. 6 at Walter’s friend’s house. The team was joined by Sierra County deputies in this phase of apprehension efforts.

“Walter originally attempted to escape when he was first contacted, then barricaded himself in the house where he moved freely between the first floor and attic,” Johns said.

The CDC team on scene had periodic verbal contact with him until the Plumas County SWAT team arrived, “It’s our belief that Walter believed the SWAT team would enter the residence, causing damage, and felt it was best if he gave up so his friend’s house would not be damaged,” Johns speculated.

Walter gave himself up after approximately three hours of talking to him and after SWAT arrived on scene, Johns said.

According to Johns, CDC had placed a parole hold on Walter, so he was being returned to prison for allegedly not contacting his parole officer and for the Meadow Valley incident.

Johns said that it was his understanding that Walter had served most of his prison sentence after being convicted of a homicide.

Walter and Kelley got into an argument that turned physical. Walter stabbed Kelley in the neck with a knife that led to Kelly’s death. “The only witness to the crime was Walter’s mom (Walter provided no information),” Hollister explained.

In 2004, Walter was convicted of voluntary manslaughter with enhancements for use of a weapon. He was sentenced to the maximum allowed by law, which was 14 years, Hollister said. He had also been in prison before due to previous convictions.

In the current case, Hollister said that Walter was charged with felony domestic violence with an enhancement for inflicting great bodily injury. “His prior convictions are alleged as a strike prior, a serious felony prior and a prison prior(s),” Hollister said. “We are continuing to work with the victim on the investigation.”

Walter was in Superior Court on Thursday, Aug. 8, for arraignment.

According to Johns, Walter would be returning to prison.