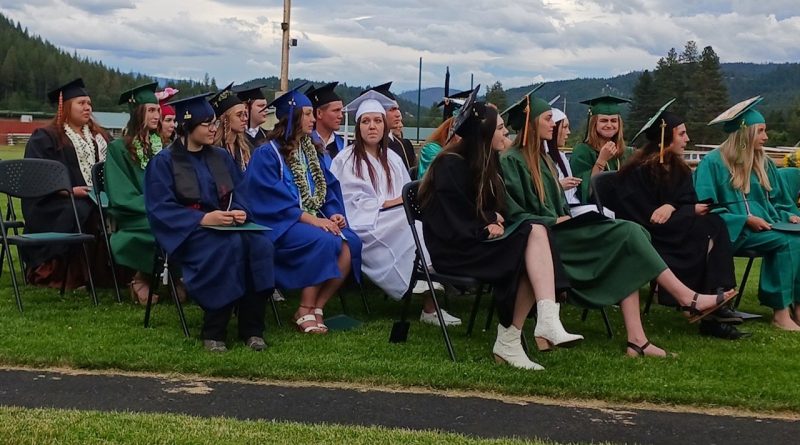 On the warm, overcast evening of June 3, family and friends gathered at Feather River College to celebrate Plumas Charter School’s class of 2022.

PCS Executive Director Taletha Washburn welcomed guests and acknowledged that the ceremony would be one of the most emotionally-charged they’ve ever had. Washburn addressed the Dixie Fire and the effect on students and staff. She expressed gratitude to those who advocated on behalf of the school to replace the building that was lost in Greenville.

“Through the hardships of the last year, we have learned to rely on our communities to support each other during our greatest times of need. The Plumas Strong motto is a tangible thing,” said Washburn.

Quincy Site Coordinator Brittini Wade then welcomed Heather Ayotte’s family onstage and presented them with a posthumous diploma. Wade shared that Heather was on track to graduate with her class and described her as a bright and kind young woman. “She was often the first student to complete work or know the correct answer to my questions. To know her was to love her and we want to honor her tonight,” said Wade. (Heather died in a vehicle accident last year.)

One student from each learning center addressed their fellow seniors and audience of supporters. Kahlea Ney from the Chester Learning Center reflected on COVID, the Dixie Fire and the hardships that students faced the past two years.

“Despite every set back and difficulty, we succeeded. With each of these difficulties, we made it through; with a few scrapes and bruises along the way. We made it through and it made us stronger,” said Ney.

Talia Hydrick from the Quincy Learning Center shared that she is inspired by her teachers and peers to reach for every opportunity and then give back. She spoke about attending many different academic programs during her education and compared learning at PCS to exploring the natural beauty around Plumas County.

Kaidyn Holland of Indian Valley Academy reflected on the many once-in-a-lifetime events that her generation has witnessed. “We’re likely the most resilient group of people I know,” she shared. Holland encouraged her classmates to take chances, be brave and to forge their own path, rather than wonder what might have been.

“Through our conviction and holding our ideals and values, I believe that this class in front of me is about to bring a brighter future,” said Holland.

The evening’s keynote speaker was Plumas County Sheriff, Todd Johns. He advised the graduates to find people they can rely on to support them wherever they go. “Choose people that motivate and inspire you through life’s challenges and curve balls,” said Johns.

Johns then shared the parable of the old mule. The moral of the story was to shake it off and step up no matter what life throws at you. “If we face our problems and respond to them positively without giving into panic, bitterness or self pity; the adversities that come along to bury us have the potential to bless us,” said Johns.

A new element was added to this year’s ceremony. Nearly half of the graduating seniors completed a career technical education pathway and were presented with a color cord representing their field of study. Washburn explained that the intent of the CTE program is to provide students with hands-on experience in living-wage career fields of interest to better prepare them for the work force or post-secondary education.

Representing the Greenville Rotarians, Rubke encouraged former students to apply for the rotary’s new alumni scholarship. “We didn’t receive any applications this year so we hope to see applicants next year,” he said.

Up next was the rose ceremony, during which each student handed out two flowers to people in the audience who had been influential in getting them to where they are today. This year, the graduates handed out a sunflower to honor their late classmate, Heather Ayotte in addition to the traditional rose as a tribute.

The presentation of diplomas followed. Each site director/coordinator– Keri Reed from the Chester Learning Center, Ryan Schramel from Indian Valley Academy and Brittini Wade from the Quincy learning center– introduced the seniors from that site. Joining Washburn in presenting diplomas was Steve Hill, president of the PCS board of directors.

PCS teachers from all of the learning centers lined up in front of the stage to congratulate graduates as they returned to their seats.

The Class of 2022 includes students who had joined PCS at different stages of their educational journey. Some had been with the school since kindergarten, while others transferred in elementary, middle or high school.

PCS is a personalized learning school, which means students can pursue their education at their own pace, leaving time to pursue personal interests, college courses and employment. Several students leveraged the opportunities of self-paced learning and concurrent college enrollment to graduate early.

Plans for the future include attending community college locally or elsewhere, pursuing four-year degrees, entering (or continuing) in the workforce, joining the military or even taking a gap year. Fields of interest include nursing, agriculture, animal science, software engineering, outdoor recreation leadership and hospitality and tourism.

Before inviting graduates to turn their tassels and toss their caps, Quincy Site Director, Patrick Joseph offered thanks and closing remarks to the graduating class that included his son.