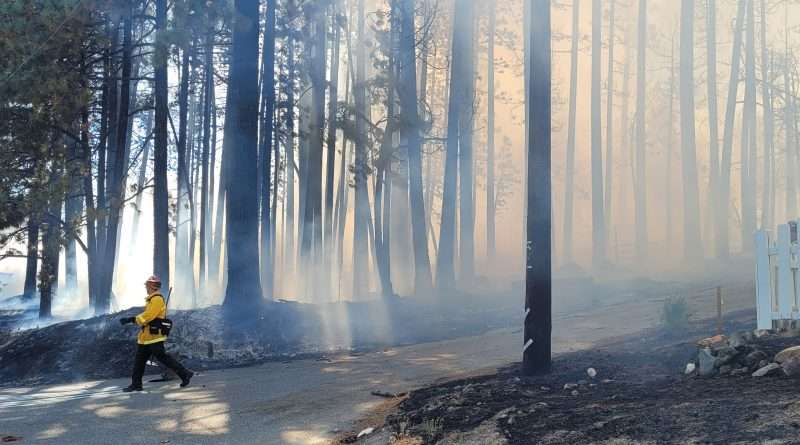 Firefighters work to knock down the fire, with smoldering trees directly off Hwy. 70 in Portola on Friday, June 18. Photo by Lauren Westmoreland
News
June 18, 2021June 23, 2021 Lauren

Plumas County Sheriff’s Office has released this statement: On June 18, 2021 at approximately 1525 hours, or 3:25 p.m., the Plumas County Sheriff’s Office Communications Center received a report of a structure fire at a residence on North Fourth Street in the City of Portola. Beckwourth Fire Department and Eastern Plumas Fire Department were immediately dispatched to the scene.

Multiple 911 calls reported the residence to be fully engulfed. Plumas County Sheriff’s Office personnel arrived on scene and commenced evacuations of the surrounding areas. A Code Red Alert was issued to the evacuated areas. Hwy. 70 was shut down in the area of the fire and the California Highway Patrol responded to handle traffic control.

An evacuation center has been established at the Portola Station Baptist Church, located at 171 South Gulling Street in the City of Portola.

Mutual Aid requests were sent out and multiple fire departments have responded to assist. The most recent information from the Incident Command is there have been three structures destroyed. The fire has spread into surrounding vegetation and trees. The size of the fire is approximately two acres, with multiple structures threatened. Crews are currently working to contain the incident and extinguish the fire.

29-year-old Eric Armstrong has been arrested in connection with the fire and has been booked into the Plumas County Correctional Facility on a felony charge of 452(b) PC – Unlawfully causing a fire that causes an inhabited structure to burn.

There are no reported injuries related to the fire at this time. The cause of the fire is currently under investigation by a State Certified Fire Investigator. More information will be released as it becomes available.

The investigation is ongoing and anyone with information in regard to the fire is encouraged to contact our office by calling 283-6300.

PCSO would like to thank all the responders including the neighbors who quickly went to work to assist with fire fighting efforts! We would also like to thank the Sierra County Sheriff’s Office for their quick response to assist us with evacuations.