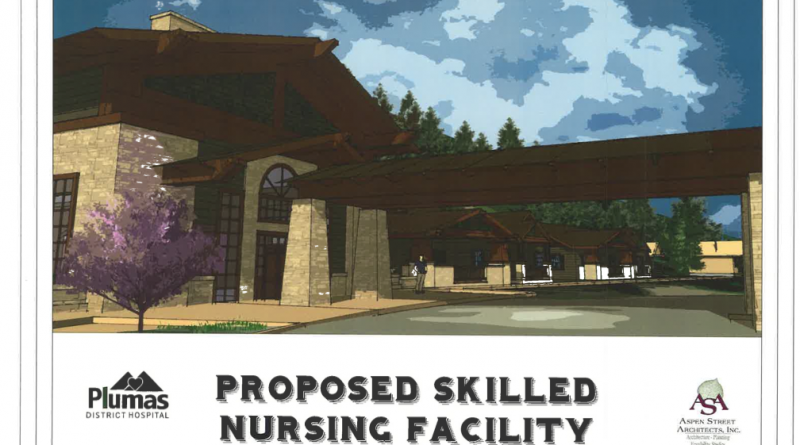 This is a rendering completed by Aspen Street Architects of a proposed skilled nursing facility for Plumas District Hospital.
News
November 13, 2020November 16, 2020 Editor

Is a new skilled nursing facility going to be a reality for the Quincy area? It’s certainly moving in that direction. Last evening, Nov. 12, the board of directors for the Plumas Hospital District approved agreements with design and project management firms.

A design services agreement was approved with Aspen Street Architects in the amount of $199,340, while a project management services agreement was OK’d with Kasa Enterprises for $512,340. The scope of work with the design firm is expected to be about six months, while the latter is scheduled over the 38-month construction process.

The hospital has been working with Aspen Street Architects to determine the feasibility of the project, however, since Plumas District will be proceeding with a design-build plan, Aspen isn’t allowed to bid on the project, since the entity would have an advantage in the process.

The hospital district has investigated building a skilled nursing facility since the Quincy Nursing & Rehabilitation Center closed in 2015. The new facility will be located on property across Bucks Lake Road from the hospital. According to Beatty, the initial phase would include 24 beds and the bulk of the support phases. It’s planned that there will be a total of three phases with a buildout to 72 beds.

The biggest hurdle has been how to pay for the estimated $15 million dollar facility, but the bulk of the funding will come from a USDA loan. A committee is also forming to solicit community support with former school board member Dwight Pierson and former hospital CEO Dr. Jeff Kepple tapped to spearhead the effort.

While work is progressing on the skilled nursing facility, the hospital district also is focusing on the needs of the other end of the age spectrum.

A child care center is planned to operate out of a residence that the district purchased last year, which is located adjacent to the hospital campus on Valley View Drive. The home was gutted and is being transformed into a center where staff can take their children. But in the meantime, a center for school-age children opened Nov. 2 on the Alder Street campus of Quincy Elementary school, and the infant-to-5 age group will be cared for at the former Head Start building located on fairgrounds property.

Tiffany Leonhardt, the hospital’s director of public relations, worked with Jennine King, the childcare center director on its state license – a 188-page document. Leonhardt said she anticipates no difficulties with the Head Start location because it previously was a preschool site, and when the Valley View location adjacent to the hospital is ready for occupancy, the center would apply for a transfer, which should be a simpler process.

In addition to site logistics, the child care center is still recruiting for a preschool teacher. Details are available on the Plumas District Hospital website.